We all arrived at The Waterfront Hotel in Anstruther without incident apart from Loz who did a scenic tour via The Erskine Bridge. Sat Nav is definitely the way forward.

Our boat The Mako had ple 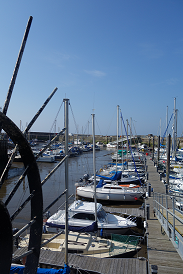 nty of space for kitting up, dive lift, loo, galley kitchen and a warm cabin.

Ropes off at 1pm allowed us all to have a long leisurely breakfast before heading off to Bass Rock. Gannets and more gannets, a truly amazing place especially as the sky was alpine blue. The plankton bloom cut the viz to 3/4m but the dive site was full of life. Deadmens fingers provided the colour, lobsters, edible crabs, velvet swimmers, prawns, dahlia anemones, butterfish, shoals of Pollack and comb jellies were seen. We finished the second dive with a fast drift. 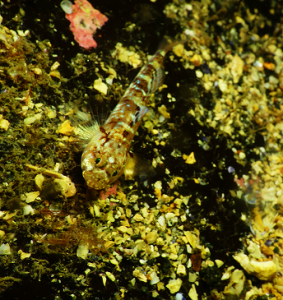 Ropes off at 1pm allowed us all to wander around the village festival, the Museum etc.

Dolphins were in the bay on the way out to The Isle of May. Puffins, auks, fulmars, kittiwakes, plus a variety of gulls were seen on route. The viz was around 6/7 m on the dive site with some wreckage in the gullies. The gullies and large boulder field were full of squat lobster, deadmens fingers, hydroids and bryzoa. The sandy patches were home to sand masons, gobies, and huge edible crabs.  Sponge crabs and tiny hermit crabs scuttled away from our torch beams. 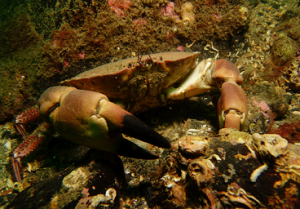 We went south to dive The Arizona which was covered in life but the heavy plankton bloom cut the viz to approximately 2m.

Fred was on babysitting duty with Catherine on hand to help. Nicole was back in the water with Tim as her buddy. They were greeted at 6m by a seal who proceeded to follow them and nibble Tim’s fins. Their 6m safety stop was equally as eventful as they watched seabirds diving past. 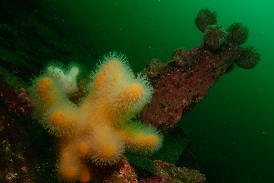 The afternoon dive was on the broken wreck of Anlaby followed by a gentle drift across a sloping boulder field. Viz was around 10m, water temperature 8/9C and once again there was much to see.

The puffins were as busy as ever.  Guillemots, auks, cormorants, gannets, fulmars, kittiwake, arctic terns and a pod of dolphin on the journey out meant that there was as much to look at above water as below.

First dive of the day was scenic and packed with life. Highlights were the number of very large edible crabs, several large lobsters, sponge crabs, sea spiders, a white octopus and the biggest pale translucent anemone any of us had ever seen. We are still trying to identify it via Sea Search. (–no camera when it was very much needed.)

The afternoon dive was on the intact wreck of The Primrose at 28m. The viz was 12/15m and thanks to skipper Steve we had perfect slack water. Long clawed squat lobster were under every plated piece of metal,  nudibranch (crested aureolis) lobster, conger eel, a  variety of crabs,  hydroids and bryzoa were located. 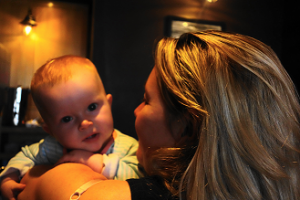 A great hotel, a well-equipped hard boat, a good skipper and super buddies made the whole trip most enjoyable. The bonus was seeing Catherine with our youngest member Penny (10 months),

Nicole back in the water and David as a newly qualified Sports diver with his buddy Wilf.