On Saturday the 28th of May, eight divers from ECSAC travelled north: six to Inverness and two to Cumbernauld. Those staying at Inverness enjoyed a Spanish meal at La Tortilla. On Sunday, we continued our journey north passing through Ullapool on our way to our accommodation at Sheigra. The spectacular scenery on route made this long journey positively enjoyable.

Monday the 30th of May

We met Chris and Cathy (the proprietors of Dive KLB – North East Dive) at the harbour to load our kit on to Wildcard for a 9am start (this was to be the pattern for the week), before heading up the coast to dive two sites on the north side of Roin. Both were large boulder slopes interspersed with short walls. Vis was 10m+ and the water temperature 10C. The colour was provided by Deadmens Fingers, a wide variety of sponges, feather stars, star fish, hydroids, bryzoa, anemones and sea squirts. We also spotted octopus, nudibrancs, Butterfish, Angler fish, Edible and Velvet Swimming crabs and Cat Shark.

Tuesday the 31st of May

As there was still a slight swell, we headed south to Laxford to dive Bodma Drun pinnacle. Four of us made 26m without hitting anything whilst the other four managed to have a good scenic dive! Our second dive was Eilean Aird Wall which was a Long-Clawed Squat Lobster nursery. Sea Cucumbers and Leopard Spotted Gobies, Brittle stars and Squat Lobster in every crack and crevice.

Wednesday the 1st of June

The wind dropped, the swell disappeared, the sun came out and we had flat calm seas. We headed north to Sheigra, to dive The Dog’s Arch (what other divers call The Dogs ******!!). Totally justified: the topography was stunning and the viz was around 12/15m. A large arch plastered with life, sink holes at the base of the gulley, the rocky floor made from huge smooth, rounded boulders. Every surface was a mass of colourful marine life.

Our second dive was the classic Ministers Point; a gulley that rises to a chock stone at 5m and then drops down through a very narrow gap to 25m exiting into a ledged amphitheatre. The first part of the dive has the well scattered remains of a wreck on the seabed and is carpeted with Dahlia Anemones. The gulley walls are plastered with Baked Bean Sea Squirts and White Lace Sponge.

A fantastic day which ended with a drive to visit Smoo cave near Durness. Phil and I had a very late return to the Lodge as we stopped for a German girl who had had a puncture and had been waiting over four hours for a recovery truck. Phil managed to inflate the tyre enough for a 15-minute drive at 30mph before he had to repeat the process. As she was staying at Lochiver our visit to Smoo had a 70-mile detour added to it.

Thursday the 2nd of June

The weather was perfect. We headed south to Handa Island to dive Handa Glasleac . We passed rafts of Guillemot and Razorbills and the occasional puffin. This site was Scotland at its very best: 15m viz, huge rocky steps, bright white sand, every surface a riot of colour, plus cracks and crevices full of life from tiny juvenile Squat Lobster to huge Edible Crabs. We spotted nudibrancs, Rockling, Ballan Wrasse, Cuckoo Wrasse, Butterfish, Lobster, Velvet Swimming Crabs and Pollack.

Our second dive was The Caves at Doehill which was equally as good. A fantastic day’s diving topped off with Alison, Anna, and Jane treating everyone to a Jubilee Party Tea. We even had Union Jack bunting. 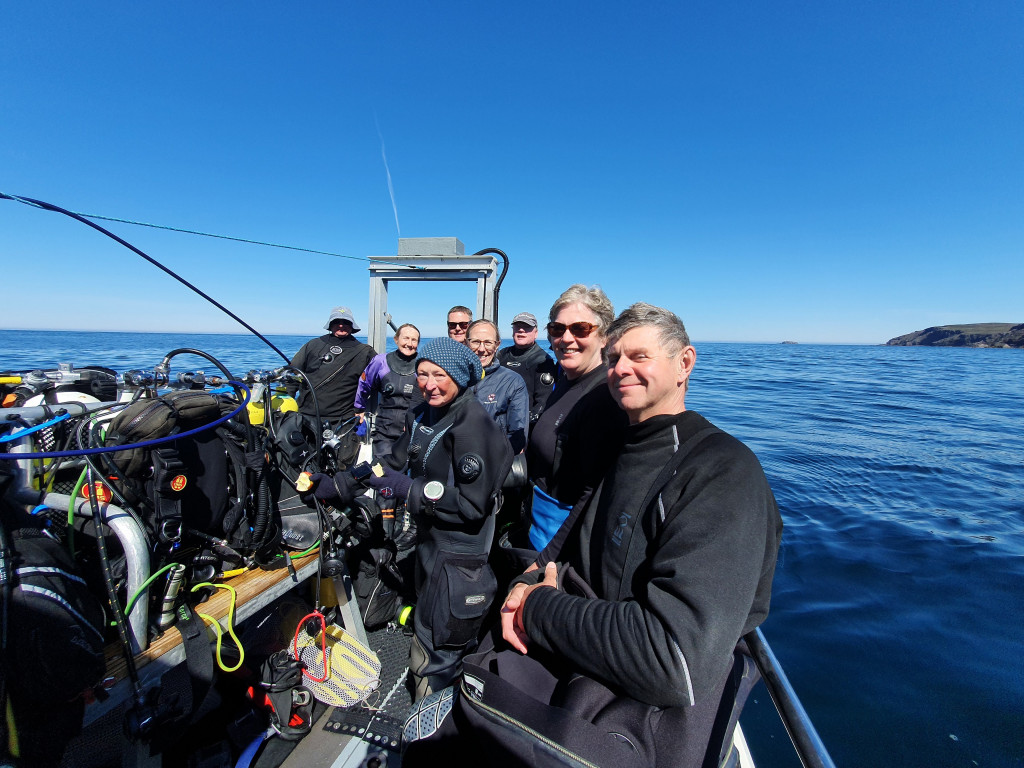 Friday the 3rd of June

We headed north to Sheigra to dive the rocky ledges specifically to look for crayfish. We found them and they were in the main large adults. Alison’s smile on the lift said it all.

Celebratory meal at the Old School house in Kinlochbervie.

Saturday the 4th of June

Back to Handa to dive with Guillemots and Razorbills. They see bubbles on the surface and dive to investigate. They are so graceful and streamlined but best of all turn to a shimmering silver colour when underwater. We hung onto the kelp to watch them.

We finished diving with site three on Roin. before returning to Kinlochbervie to unload the boat and pack the cars. We drove to Inverness for an overnight stay and another meal at La Tortilla. Sunday was a drive home.

A fabulous week with dive buddies Pat and Phil, Mark and Anna Hickson, Tim Porter and Jane Sheldon, and Loz Broome and Alison Brammer, plus Tina and Steve from Bristol. Thanks to everyone for making this a truly magical trip (Cathy’s YouTube channel, found below, says it all in video).

Dive KLB – North East Dive can be found online and on Facebook.

Catherine Hollingdale’s YouTube channel highlights some of the fantastic dive sites to be found in Kinlochbervie.

Great Scottish Diving, a YouTube video from Catherine again, in particular is worth a watch.

Mark Hickson captured the wonders of this trip in his wonderful photographs, shown below: