Our second trip of 2013 in July was focused around Rhoscolyn. We camped at Mike and Alex’s favourite campsite at Pentre Iago Farm where we have stayed several times in the past.  Pam, Peter, Aiden, Tara and Fergus joined us on the Friday night for supper and hot chocolate after pitching up for the night. 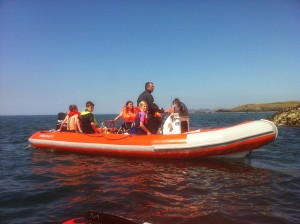 On Saturday we packed the car up to hit the car park early before it filled up and met up with Anna, John, Tom, Heather and Will before heading for Coracle Bay and our first snorkel dive.   The divers were also over for the weekend and Phil kindly agreed to take us out on the new club RIB, Topcat.  After their first dive Phil met us at Coracle Bay and we headed off around Rhoscolyn Beacon and then along the coast. There were a few seals around the Beacon and Mike jumped in with them for a play before we headed off again on our tour. 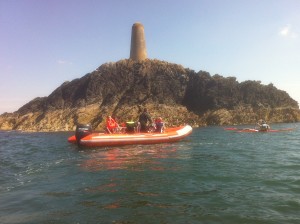 In the afternoon we established radio contact with the divers and some of the snorkelers headed off for the Beacon again in Dave’s inflatable boat. Anna and Tom were brave enough to snorkel with the seals this time before jumping back on the boat for a tour around the Beacon.

The BBQ was scheduled for 6pm but the club boats ended up rescuing a number of other water users that had got into difficulty as the tidal currents picked up and the wind dropped.   We all met up at the caravans later that evening and thoroughly enjoyed a BBQ organized and cooked by Paul and his culinary assistants. It was great to enjoy our first “joined up” diving and snorkeling trip and the BBQ rounded off what was an adventurous and exciting day for all. 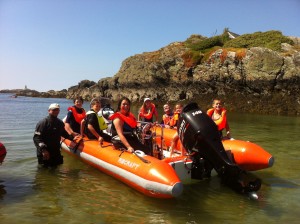 The snorkelers had a quieter day on the Sunday, shattered from the day before but again enjoyed a great trip out on Topcat before snorkelling along the east coast of Borthwen bay.  Thanks from all the snorkelers   to Phil and Paul and all the divers for making it such a memorable weekend.