Expedition Aims The aim of this expedition was to locate and identify at least one of several wrecks in the Portland Bill area.  Following up on information obtained from the Shipwreck Project, which has identified a number of interesting but unconfirmed targets. 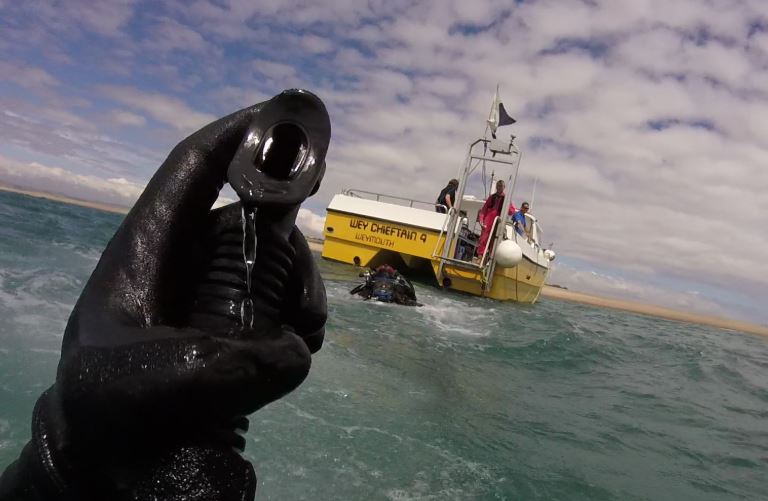 Part of the process of becoming a BSAC First Class Diver is to plan and document a diving expedition. One of our members, Cameron Cromwell, not only did the planning and documentation, but decided to actually run the project. Consequently some ECSAC members joined the Cameron on the extended Dorset Shipwreck Project to help survey and map out two unknown shipwrecks off the Dorset coast.

Using Wey Chieftain IV hard boat out of Weymouth skippered by Richard Bright-Paul the Chairman of the Shipwreck Project, the team of 10 divers in total dived each of the two wrecks four times over four days. The work involved laying out guide lines on the sea bed then using metal detectors to scan for metal objects buried under the sand and silt. Days one and two were mostly spent identifying potential targets and days 3 and 4 in digging on site to gather more artefacts and information about the wrecks which ultimately might help to identify them.

The weather over the four days couldn’t have been better and the dives and survey work were both hugely enjoyable and satisfying. The team uncovered several new items including a remarkably intact bone toothbrush from around the 17th century, musket balls and the previously undiscovered remains of a cannon. Thankfully a photographer from BSAC was there to record some of the work so watch out for an article in a future issue of Scuba magazine.

Lots of work remains to be done to log and age the newly discovered artefacts which Cameron will no doubt continue to progress. I’m sure Cameron will update us on progress over the next few weeks, and you never know we might want to explore these wrecks further in future to continue the exploration and identification process