Last Thursday a few brave souls fought through the snow and storm Emma to get to the club pool for rescue refresher training ready for this years diving. 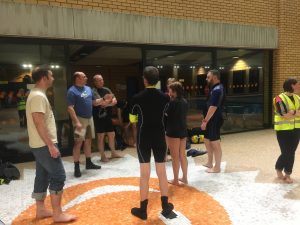 The refresher started with a recap on “Dr’s ABC” we then went into buddy pairs carried out buddy checks (BAR Buoyancy, Air, Releases). The dive skills where broken down into four stations manned by dive instructors. Station 1 was AS skills, station 2 was CBL, station 3 was rescue breaths and finally station 4 de-kitting. All involved enjoyed the evening and believed the exercise worth while. I have listed the tasks we practiced and if anyone would like a refresher please add your name on the list at the club.

Thank you to the pool marshals who also fought through the weather and without whom we could not have run the training. 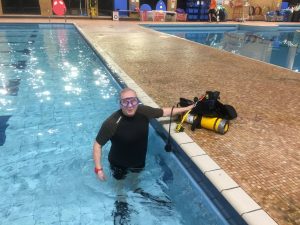 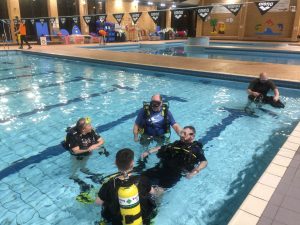 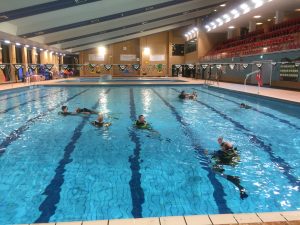 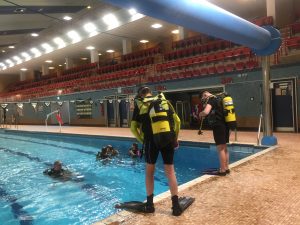 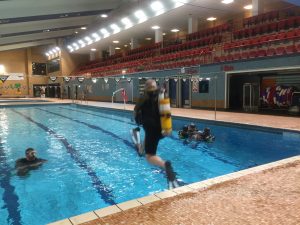 Station No. 1
Alternative Source (AS) – This is for a diver who is conscious but out of air.
Deep end of pool
On surface manually inflate BC (1 breath off Reg 1 blow into BC trunk).
Descend to bottom of pool the distressed diver (DD) signals out of air.
The rescue diver (Hero) shows octopus.
DD takes the octopus and breathes off the Reg. At this point time should be allowed for the DD to calm down before trying to ascend.
DD & Hero hold each other’s BC (Not the couth dump arm).
DD & Hero both ascend controlling their own BC and Dry suit air release when ascending.
On surface the DD Manually inflates BC while the Hero auto inflates their BC.

Station No.2
Control buoyant Lift (CBL) – This is for a diver that is unconscious with air.
Deep end of pool
Shake the Distressed Diver (DD) for any response.
Put the DD Couth dump arm on shoulder and link your arm around this arm holding the DD BC trunk.
With other hand hold the DD BC.
Hero puts some air in DD BC to start the ascent but once they are both ascending the Hero has to let out air to ensure the ascent is not to fast. Once on the surface the hero fully inflates the DD BC and then his own.
Signal for help and put 10 breaths in DD using mouth to nose.

Station No.3
Mouth to Nose
Mid pool standing depth
Remove the mask
Extend the airways by tilting the head back. (Tip: If you cannot swallow then your airway is extended this is the angle the DD Head needs to be).
Shown the pistol grip
Shown the position of elbow and your other arm under the DD back/shoulders.
The student put this together and then tip the DD towards themselves to do mouth to nose.
All ensured a good seal is made, mouth to nose. No breaths where given as just a training exercise.
10 Breaths should be given when surfaced and then tow to shore ASAP or get on boat ASAP.

Station No.4
De-Kitting and out of Water (Danger)
Shallow end of pool
Speed is a MUST the faster this is done the better chance of survival.
Highlighted that no kit should be clipped across the diver if possible to help getting the equipment off quickly.
If help is their tell them what to do as you remove your own kit.
Remove the weights if not already done so.
Remove the BC. As Clive pointed out air can be released out of BC to help to clear it in deeper water once all clips have been released.
2 lifting techniques were shown the under arm lift and crab lift
Remember to get help straight away.

Follow “Dr’s ABC”
D = Remove from DANGER this is usually the water.
R = Responsiveness
ALERT – are they alert?
VOICE – shout they name do they respond?
PAIN – poke them hard do they respond?
UNRESPONSIVE- if no response send for help and start life support.
Note: if the distressed diver has rattled breathing (Agoinl Breathing) this is not normal breathing so treat as if not breathing.
S = Send for help
A = AIRWAYS – make sure the airways are clear and extend them.
B = BREATHS – give 2 breaths and another 2 after 30 compressions.
C = COMPRESSIONS – firm and hard chest compressions approx 100 to 120 per min (To the beat of staying alive). 30 compressions and then 2 breaths.

Do not stop until help arrives.

If there is a Defibrillator 1st thing to do is cut the dry suit from neck down the centre of body. Put the defibrillator on straight away and follow the instructions.
In the cases of IPO’s (Immersion pneumothorax odemer) get casualty out of water and put them on 100% oxygen. Do Not give the casualty fluids.

In the next few weeks the instructors and I will be running a refresher at the club in one of the RIB’s on CPR, putting the oxygen rigs together and using the defibrillator. For the bargain price of £0.00 Yes that’s right it free, how do we do it! Please come along and join in. There are other obstacles to take in consideration when in a RIB performing a rescue. I will keep you posted on the date.