In 1952 I was “invited” to join His Majesties Armed Forces as a National Serviceman! With 499 other men I attended an introductory meeting, medical check and educational tests in Manchester. For some reason I was detained after the 499 left and invited into a meeting with officers from all three services and offered,” more money, more travel opportunities and a choice of Army, Navy or Air Force to play with over a longer period than the two-year National Service”. I joined the RAF and an opportunity for all three and enjoyed every minute.

Based with a Maritime Reconnaissance squadron in Northern Ireland I had plenty of opportunity for free diving along the Antrim coast. We made frequent flights to Malta and Gibraltar, working with our Navy friends, hunting their submarines and talking diving. They were generally employed in harbour using oxygen. Unfortunately, I was never allowed to play with their rebreather equipment although it was rather heavy and with full face mask didn’t look as good as the Draeger gear used by Hans Hass at this time. Mask, Fins and snorkel were always with me. No wet suits, only swimming costume so didn’t need any weights.

Malta was still suffering from the horrors of war and the sea bed was covered by large amounts of unexploded munitions and wreckage. Who cares, the visibility was fantastic, sea life wonderful, travel free and I was being paid to do it.  Home on leave in 1953 I was told about the BSAC and a training scheme at Sunlight House in Manchester. A call at Sunlight House in Quay Street provided the information that the training was now at High Street Baths. At my first visit I was given a short swimming test, fitted with an “Aqualung” and given a brief lecture on its use. Great, I swam up and down the pool then instructed on how to remove and replace the mouthpiece underwater! Twin house Siebe-Gorman Mistral valve with canvas covered rubber hoses. Great, remove mouthpiece, hold mouthpiece above head to blow water from tubes, replace mouthpiece and carry on breathing. One slight problem! Early sets were not fitted with non-return valves in the mouthpiece so what do you do with the water retained in the exhaust tube? Answer, swallow it. (I thought) I did this several times then surfaced and burped a mixture of air and water for a few minutes before telling my instructor how brilliant it was. Normal procedure was to swim on your left side and hold the mouthpiece to starboard.

Shortly after Manchester number 2 branch moved to Oldham, I considered this to be too far to travel so spent the next 5 years free diving and spear fishing.  Then I found Fenn Aqua Sport in Stoke, paid a visit and bought a Mistral Valve and 50cu ft cylinder. Ann and I were married on September 4th, 1954, I left the Air force in 1955 and we spent all our spare time kayaking, cycling and whenever we were near sea or lake diving. Very quietly exploring on my own. I was given a wet suit by a friend who used it for water skiing. It was a two-piece single skin neoprene, Colour bright red and 3/16-inch-thick. I needed a pint of washing up liquid to slide into it and left a trail of soap bubbles for a few metres when diving in fresh water! Next came the need for a weight belt. Couldn’t afford to buy one, no problem make one.

Ann had just bought a shallow pan with a lid and four aluminum bowls for poaching eggs. Filled with molten lead they produced lovely circular weights, six of these produced eight pounds, fixed with self-tapping screws to a canvas belt fitted with a steel release pin was perfect. The other essential was a diving knife. Here I pushed the boat out! I bought a traditional divers knife in a brass scabbard which I hung on my belt by it’s leather loop, Perfect! No hood, no gloves and very nearly no wife when she found her ruined egg poacher.

We had a 125cc BSA Bantam motor bike and in 1955 travelled to Penzance for a holiday. We took five days to reach our destination having called to see ex RAF mates on the way. I had a ball, snorkeling around the coast, then one day we discovered LAMORNA COVE. It was like swimming in an aquarium, so much life it was sensational. A few years later I dragged ECSAC members there every Easter for eighteen years. 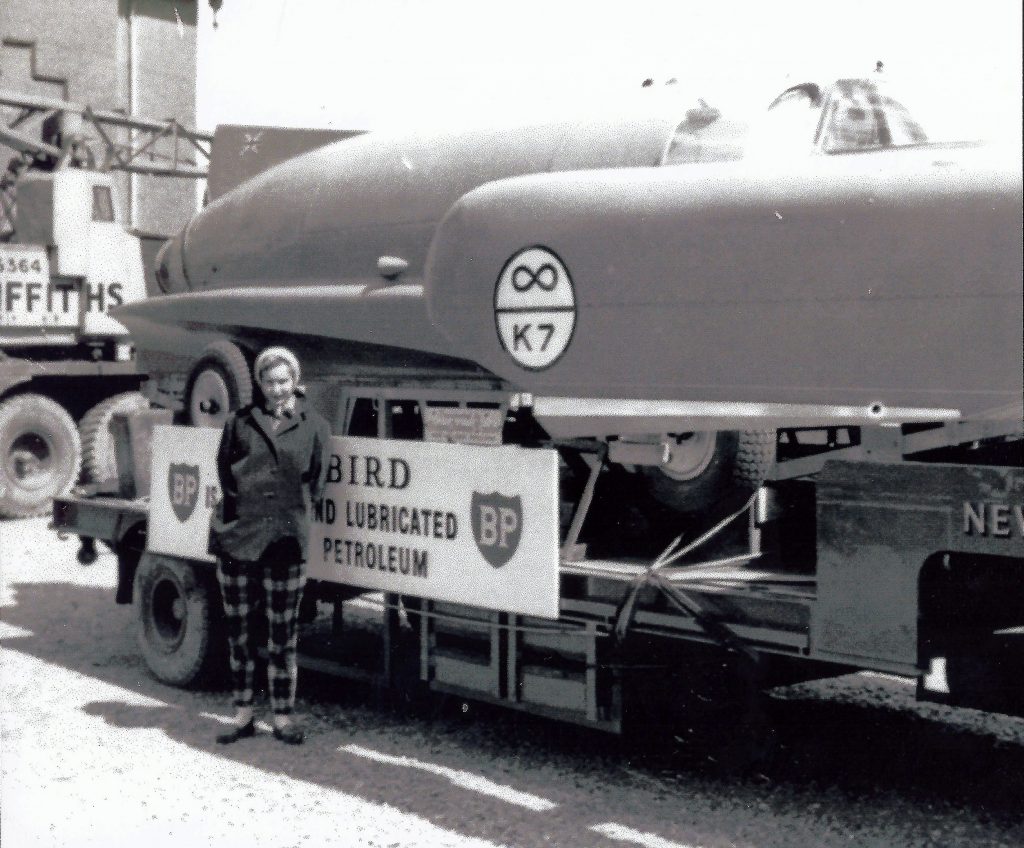 In 1958 and 1959 I worked with the K7 Bluebird team at Coniston when Donald Campbell set a new water speed record of 263 mph.   (Ann in the photo above next to the new boat as  it arrived)

I was responsible for the support infrastructure and generated power supplies. See below for a photo of Ann and I next to the cockpit of Bluebird. 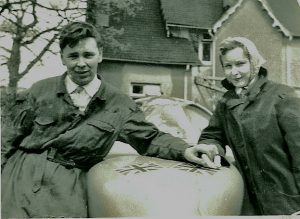 Because the mooring facilities were very crowded, to avoid damage, I installed the underwater supply cables to the refueling pump at the end of the jetty and clipped to the wooden structure. I was approached by Leo Villa, Donald’s famous mechanic, and asked if I was prepared to act as stand-by diver during the record attempts, Unfortunately the sponsors refused to pay me, safety was outside their remit and I could not afford to take up the job without payment. On the day of the fatal accident in 1967 Neville Oldham telephoned Ann, he knew of my former association and suggested we went immediately to help with the search. Ann told him I was working in Somerset and out of contact. One f the few occasions she was pleased I was away from home. 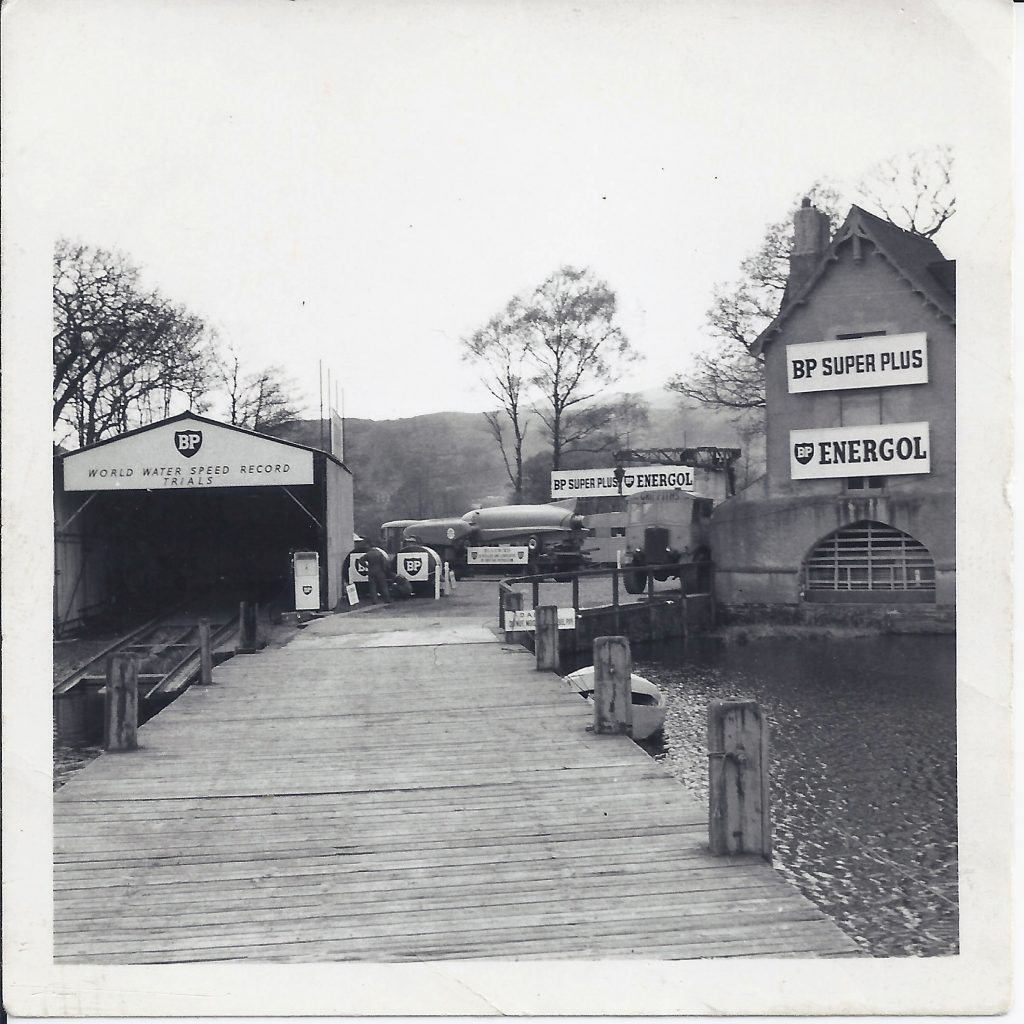 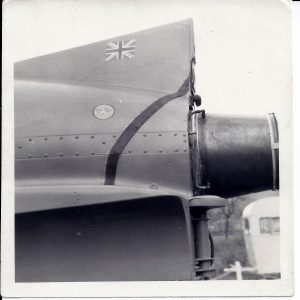 In March 2001, 30 years after the fatal crash, Bluebird was raised from the lake by a team of divers from Teesside and is now in The Ruskin Museum in Coniston, restored to it’s original state and surrounded with other memorabilia from the Campbell record breaking era. I visited the museum during the assembly and solved a small problem. They found a steel tube approximately 300mm diameter and 400mm long with a flange at one end and were unable to find were it fitted. My photograph (on the right) solved the problem.

In 1964 I found ECSAC and joined the branch in February of that year. The Thursday night routine was. Pool Training, into the pub, (various) for a pint or three and then the fish and chip shop at park green. No Club room, that came later, but that’s another story!