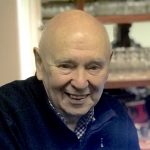 On 31 July 1945 in the Straits of Jahore Singapore, Lieutenant Fraser, in command of an improved X-Boat, HMS XE-3 attacked the Japanese Heavy Cruiser Takao after making a long hazardous journey through mined waters. Fraser slid the submarine under the Takao, which lay over a depression in the sea bed, and his diver Acting Leading Seaman James Magennis went out to fix the limpet mines to the bottom of the ship. The two side-charges then had to be released from XE-3, but the starboard charge stuck and Magennis climbed out again and after a nerve-wracking seven minutes released the charge. XE-3 then made for home. Magennis and Fraser were both awarded the Victoria Cross.

After the war realising that frogman-type diving could do many sorts of underwater work that the old-type heavy standard diving gear was unsuitable for, he and some associates got hold of war-surplus frogman’s kit and set up a popular public show displaying frogman techniques in a big aquarium tank in Belle Vue Zoo in Manchester. With the proceeds from this venture they formed Universal Divers Ltd.

In 1947 age 13, The War was over and having read every article I could find relating to “Frogmen” I was taken to Belle View to watch the display. I managed to sneak behind the scene and met two of the divers. They were still in their gear and gave me a description of the operation of the closed-circuit oxygen rebreathing set, fins etc. They informed me that some surplus equipment was available at an Army and Navy store in Oldham Street Manchester. Further pleading convinced my parents they would get no peace until they took me to the shop. I left the proud owner of a pair of Davis submarine escape goggles and a pair of Italian Navy Swim Fins, far too large with full foot and straps which fitted around the ankles. (No snorkels in those days, it was several years before Falco cut off a piece of garden hose and started a way of life without lifting your head out of the “oggin” to breath).

Between 1946 and 1953 spare time was spent cycling and spear fishing, still using my original fins but with a mask imported from the USA. Then the BIG change occurred. A cycling friend produced a compressed air breathing set. He had never used it and at that time I had no real interest, however I could not resist the temptation to try. The set was made by Draeger and had a single stage single hose regulator. The regulator was approximately 150mm diameter, was secured to the cylinder by a DIN thread and had a single corrugated hose and mouthpiece. No contents gauge, no reserve valve and a harness that was so complicated we tied it on my back. My “Suit” consisted of a pair of old cotton trousers and a cycling sweater, no weight belt, no gloves and no hood. The dive venue was a deep pool in the River Bollin at Castle Mill, date 26th December 1953, maximum depth 2.5 metres. Sensational!!! I even saw a trout. The after dive was even better, 2 large glasses of Brandy in “The Romper” at Ringway.

Next move was the formation of BSAC and No. 2 branch, then based at High Street Baths in Manchester, But that’s another story!