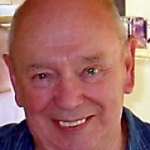 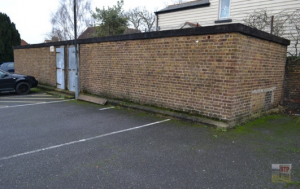 Our club room looked like something out of a Spielberg Movie! Built of Accrington Stock Brick, Sand and Cement mortar and a 9-inch-thick reinforced concrete roof, it was surrounded with a jungle of weeds and had been unused since the late 1940s. But it was ours, a rent £25 per month, car parking space and a corrugated iron extension at the northern end, a secure storage space.The photo is not ours but a similar building.

First move was to test and reconnect electricity and water services. Then a general clean up and then, the first Annual General Meeting in our new home. Seated around a few 3-kilowatt heaters, on camping chairs and tables. (Plus, the inevitable “Sneaky Pete” keg).

(Note: I do not have a photograph of our original club from the outside, this is a standard of the type of building built all-round the British Isles. – if someone has a photo please share with Kevin and he will upload it.)

Ann recalled this AGM was only attended by 12 people including Officers and Committee members. The highlight of the meeting was the arrival of our Chairman, Mr Stewart Davidson FRCS. He arrived wearing Evening Suit, Black Tie and a very broad smile! “Is this the standard we will be expected to match at every meeting from now on”? No, he was attending a formal dinner at the Hospital later in the evening.

Ideas for future comfort were flowing from all members, Pete Smith (Equipment , Officer) had found a cheap source of American Army Surplus heaters which burned used engine oil, “very efficient and no smell”. “There’s an old boat in a garden in Poynton, make a super bar”. “We need to make an application for a Club Premises Licence for alcohol and music”.” When are we having the first Party”?

The heaters arrived and were converted to burn Paraffin, used engine oil had a horrible smell. We had a let’s move a boat from Poynton day and the carpenters built a super bar. Neville Sheard, our Brewer provided help with the licences and an account for a drinks supplier. Then we had a party! After several parties we invited the Board of Directors of Frost’s Mill to one and they were so happy they reduced our rent to One Shilling (5 pence) a year.

So, we went diving!

The normal air routine in the early days involved a journey to Stockport Fire Station to charge cylinders. This was a success however could involve a return journey for collection if their service was in use for their equipment. All cylinders manufactured in the UK were steel and limited to a pressure of 120 bar. Members with Draeger and Spirotecnique cylinders were unable to obtain a full charge from most UK sources. I discovered Siebe Gorman had a maintenance workshop and charging facility adjacent to Manchester Docks. (Now Salford Quays). I was working nearby and took members cylinders for charging, including continental sets. On one occasion Ken Jores asked if I would take his Draeger twin set for charging and carry it to Lamorna Cove where we had a dive planned. He was delighted to find it had been charged to the test not the working pressure/, He made three dives from one fill. I was not very happy, I’d carried a potential bomb in the boot of my Mini the 360 miles to Lamorna on ordinary roads, motorways were not completed.

On October 2nd, 1964 I was diving Outer Bucks a 40 metre dive with Neville Sheard. After 15 minutes Neville started to cough, his single hose regulator was floating above his head and mask flooded. I pushed is mouthpiece into place and held it firmly ditched his weight belt and started to lift him. CO2 inflatable type life jackets had become branch standard equipment shortly before this and we were both equipped with them. I was responsible for instruction of use and had emphasised their use as surface support equipment. Once our ascent was under control and Neville was calm but still trying to control his smokers cough, we surfaced. Our boat cover was provided by a local fisherman. Unfortunately, although he was a great friend to ECSAC I cannot remember his name. On this dive our club member on the boat was Annabelle Jores sister of Ken Jores early Diving Officer. (Now McDonald, Wife of Roger, branch member for many years, both now living in Cornwall. During our dive this day our fisherman friend was far more interested in chatting to Annabelle than following bubbles and when needed the boat was about 500 metres away and heading west towards Lands’ End. Fortunately, we were seen, and the boat turned towards us. I ditched my weight belt (and my, very valuable traditional divers knife) and inflated both life jackets. Once aboard the boat I was able to unleash my feelings towards Neville and his very heavy smoking habit!!! He just smiled and lit a cigarette. 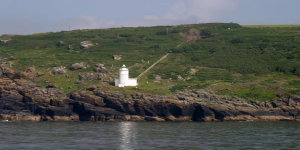 Ann found, in an Irish travel brochure an article about a large country house converted to a hotel. Ardnagashel House was on the shore of Bantry Bay and was described as a centre for the new sport of Skin Diving! We booked and travelled by ferry from Liverpool. No RORO ferries, the car was craned on and off.

The hotel was brilliant. I only took basic kit, thinking of an investigation of potential dive sites and some free diving.

The owners and operators were an ex Cavalry Officer Colonel Kaulbach and his wife, both with lots of energy and a great sense of humour. First meal was Sunday Lunch, to my horror I discovered the menu was in French! Trying to read it using my schoolboy French was hopeless, then I realised it was “Irish French”, creating lots of laughter around us, As an example an item in the puddings section was “Cognac avec Photographique” (Brandy Snaps). We had a week of working the menu into English.

There were no divers around but the visibility was good and I was enjoying my free diving, when Colonel Kaulbach asked me if I would clean the mussels off the moorings in his small harbour. When I said I don’t have any gear with me he immediately offered the use of his equipment. I readily agreed thinking, great I can investigate the area better.

He produced a beautiful mahogany box with a hinged lid, opened it and I almost passed out on the spot. Inside was a Cousteau-Gagman twin set Circa late 1940s, sitting in a padded shaped box with a twin hose regulator housed alongside. This was fixed to the manifold by 6mm bolts. A bronze key was supplied to tighten the bolts onto, what looked like, a leather gasket fitted within a recess in the regulator and similar on the manifold. The harness was simple, two shoulder straps and a jock strap with a loop to fit a hook on the weight belt. I wanted to try it, like now! Unfortunately, it was empty. “No problem” said the colonel,” I’ll bring my compressor and you can use it tomorrow”. It was only 2pm, a summer afternoon, “what are we charging this with, a bicycle pump” was my immediate thought. The compressor was produced, and I was fascinated. When Boeing produced their B29 four engine bomber, each engine was equipped with a tiny air-cooled compressor to maintain the high-pressure air used for a variety of pneumatic components. I had one before me, manufactured by Cornelius in the USA this one was fitted with a tiny air cooled two stroke engine from a clip on bicycle engine popular at the time. Fortunately, the exhaust had been extended and terminated outside the store room were the set was located.  Maximum pressure was 1800psi and it produced half a cubic foot of compressed air per minute. It took 10 hours to charge the set. The complete assembly was the size of a modern Dyson Vacuum cleaner drive.

I couldn’t wait to get home and discuss this with Pat Heron, typical, he knew about them, He had located a source and shortly after we had one each. Filters were produced by Pat from suitably modified hydraulic rams and the units were fitted with half horsepower electric motors driving the units by Vee Belts. The future problem using these units was finding dive sites with a suitable electrical connection, this was solved by the then General Post Office! They conveniently provided electric lighting in all their Public Telephone kiosks. Remove the lamp, fit a dual outlet bayonet cap adaptor, plug the lamp back in and the compressor into the other outlet and we had a power supply which switched on at dusk and off at dawn. A pressure relief valve opened at 1800 psi so no danger of damage if the cylinder reached maximum pressure This was the first of many brilliant projects Pat engineered for the club, the ultimate job being the manufacture of the Hugh filter, made from an axle of a redundant steam locomotive and connected to “The God” our US Air Force petrol driven air compressor. More of that and it’s Cornish associations next week