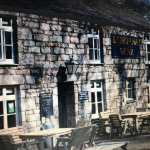 Neville Oldham and Roy Hyde (First Diving officer) Discovered the diving potential of the Coast from Newlyn to Lands’ End in the early 1960s. With the arrival of the clubs first boat (the Avon Redshank), dives beyond  the cove were discovered and “The Wink” (see picture on the left) became ECSAC southern club room. Small groups of four to six members using the pub car park grass perimeter as a camp site spent most of the summer there and became good customers and friends to the local businesses and fishermen. 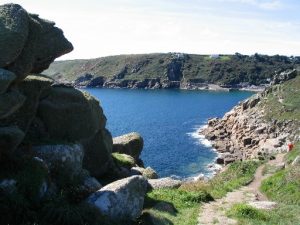 Holiday divers were not popular during the 60s, particularly along the North Cornish Coast, fishermen were convinced their pots were raided and gear damaged. The South Coast was quickly developed by local divers helping the tourist industry by providing shells and sea urchins for sale in the holiday towns and villages.

A large sack attached to the handle of a five-gallon plastic Jerry Can. Fill with water and dive, 10 to 20 metres. Urchins were everywhere in all colours and sizes along the coast. As the sack gets heavy, a quick blast of air into the fill point to maintain a slight positive buoyancy. When the sack is full more air and an easy ride to the surface. After a few months of this the poor Redshank (boat) looked like a pin cushion, although most were surface scratches, very few spines penetrated the hull. Then, once ashore 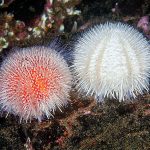 the urchins were gutted and brushed clean in the stream in the cove, with many complaints about smell and mess from the locals, then left in a bleach solution for a few days to remove the remaining spines and produce beautiful holiday mementoes. Sale price £1 each, paid to diver £1 per sack full. At least it paid for the air!

Crayfish had been caught in small quantities in snag nets set by local fishermen, sport divers occasionally brought one or two ashore from deeper waters, then the Urchin fishing professionals discovered a new market. 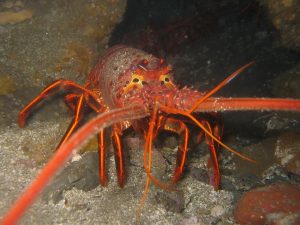 Using Army surplus alluminium raiding boats with large outboards they dived the deep waters around the south west coast and delivered their catch direct to Newlyn Fish marker for onward shipping to London and France. Diving procedures were not good, and decompression was in most cases not even considered. The result was several bends and I am aware of two divers who suffered permanent injuries. The quantity of fish taken was huge, the result, to see a crayfish in the area is now extremely rare.

Crayfish were also taken by professional divers in large quantities in North Wales at this time. Again, they were fished almost to extinction in a short time.

I am not against divers taking fish for their own table. In the 1960s and 70s ECSAC divers frequently took Lobster, Crab, Scallops and flatfish, however, with a few exceptions, catches were small, and we had some fabulous beach and campsite barbeques. Barbeques were good, and the Sneaky Pete tradition was kept alive on trips around the British Isles. One dive weekend in Devon it was agreed that Lamb Chops would be a change from fish! Ann, shore party organiser, had to order 52 chops from Mr. Shillibeare the butcher at Starcross. She placed an order several days before the planned barbeque, however, he must have had doubts about the risk involved in preparing an order this large, when Ann and her friends arrived to collect they were not ready and they had to wait for 52 chops to be cut. Result, slightly intoxicated divers and a very late meal. A new butcher for future large orders was needed. What better than “Stan Cutmore” in Dartmouth. He did Cut More too, his beef fillets were superb. 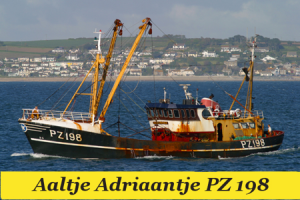 In January 1961 one of Stevenson’s large trawlers hit The Outer Buck rock whilst returning to Newlyn Harbour. Her Name was Boy David PZ197 (See the photo for a similar ship). She reversed off the rock then tried to move forward, however the bow was too damaged and she sank in 45 metres, there was no loss of life. The hunt for the wreck was started by Pete Smith, Ken Jores and Pat Heron. For the next 25 years if anybody said, “where’s Pat Heron”, the automatic answer was “looking for Boy David” I spent hours following Pat’s bubbles into deeper and deeper water with no result. He was completely oblivious of time and depth, just came up when he ran out of air. As his standard gear consisted of two “Tadpoles” (25 cubic foot bottles, ex RAF fighter pneumatics) dive duration below 30 metres was not long enough to put him in danger. Then he changed to a larger set and I insisted he dived with a surface marker, the reel of which was securely fixed to his harness, and he agreed to answer signals I sent him! It never worked, he was lost in a little World of Heron until my only alternative was pull him to the surface when he was approaching his “no stop” time. He never found the wreck, she was found eventually by Pete Smith. (Moved to Cornwall early 1970s) He said it was a very dangerous dive and would not tell anyone where she is.

Several wrecks are close inshore between Lamorna and Porthgwarra. The construction of Tater Du lighthouse came out of the tragedy of losing a small Spanish coaster the Juan Ferrer on 23 October 1963, on the nearby Boscawen Point, the vessel capsized with the loss of 11 lives. After the tragedy the Newlyn and Mousehole Fishermen’s Association put pressure on Trinity House for a lighthouse to be built, primarily to highlight the Buck Rocks and provide a fixed marker along this treacherous section of coast.

The history of Smugglers and Wreckers around the Cornish Coast is legendary but even today things happen that make you wonder, is it still going on! Shortly after Juan Ferrer was lost, Custom & Excise officers spotted a well-known diver (to them and ECSAC members) carrying a heavy object, (the ships Decca Navigator), up the footpath from Boscawen to Tregurnow Farm. When challenged he said he had found it! He had, in the wheelhouse of the wreck. My first Easter diving the area I was talking with one of the local customs officers over a pint at The Wink. I asked what her cargo was. “General Spanish exports to the UK” he said. “Machinery, Shotguns and a deck cargo of marine ply” It was a lovely day and I had been admiring the new tables and benches on the Pub forecourt, made from heavy marine ply and newly painted to match the older furniture.

About this time Pat Heron bought a boat and I provided the engine. (See photo of Pat Heron on the left below). 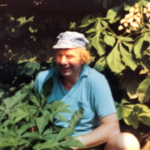 The boat was an 8-foot Avon with a rigid transom and a wooden floor. The engine I provided was a 9.5 HP Johnson twin. I thought the boat was too small and my engine too large for it, so Pat bought a 6HP engine and I bought a 10-foot boat. So now effectively ECSAC had three boats to play with. The Heron Boat from day one was called “The Puddle Jumper”. Believe me, the puddle jumper undertook some Hairy voyages. One of these was the finding of The Saba. 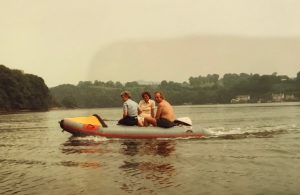 The “Puddle Jumper” in action. Pat Heron, Patricia and friend on the River Dart.

April 1966. The Saba was a 500ton Dutch coaster, carrying rolls of steel plate to The Ford Factory at Dagenham. Off Lands’ End the weather was bad, she was assisted by The Scillonian off The Longships then the cargo shifted, and it was decided to try and beach the ship at Porthgwarra. She capsized about 800 metres off shore and the crew came ashore in their boat.

Pat Heron, Neville Oldham and I decided we should find the wreck! The only boat available was “The Puddle Jumper”. An 8-foot boat with three (as they say in Tyneside “Bonnie Lads” on board, didn’t even leave room for Neville’s bottle of Rum. (He frequently offered a swig of rum during a dive, “keeps you warm lad”).

We had discussed the sinking with the Porthgwarra Harbourmaster, he pointed vaguely out to sea and said” Sheem about half a mile out there”. We all agreed it was stupid, never find it, too vague, but still carried on. It was awful as well as stupid, quite rough with a South Westerly and fairly- bumpy. Pat volunteered to boat cover and we dropped into the green stuff quickly. At least at 20 metres it was calm. Viz was good and the tide was pushing us easterly, but easily managed. To the west about a kilometre away was Lands’ End, didn’t fancy that one bit, pleased we had the tide right! No sign of wreckage, we signaled to swim towards the shore, Neville on my right. After about 10 minutes I found a long builders plank just lying on a sandy bottom. It looked new, how funny new planks float, what’s it doing here. I looked up and about 3 metres in front of me was a red painted wall! Found it! Lying on her starboard side, the red wall the anti- fouling paint on the hull. Turn right and find Nev, He was unlucky enough to be beyond the bow and had swum past the vessel. I caught him and we swam along the deck and into the crews quarters astern. I felt guilty, it was so new I felt as though I was trespassing. Outside again, must look for the mast head lights, not there, blast some thieving so and so must have dived it before us! We then found the propeller and about 5 meters of 100mm diameter bronze shaft about three metres astern. Fascinating, she must have been still travelling ahead when she hit the bottom stern first. Oh well, time to give the Heron Man a dive! Then we saw something magical and very funny! A seal wearing a white shirt. With its head through the neck the shirt was flowing behind like a cloak. We both fell about laughing couldn’t wait to tell Pat. We hung onto the Puddle Jumper laughing and explaining about the seal, the prop shaft, the rolls of steel visible in the hold, Heron was going spare! “Come into the boat the pair of you, we’re drifting I’ll never find it if you don’t hurry”. He didn’t find it for several weeks.

In The Wink that night we told the locals about it and how we thought we were first to find her, but somebody had been on board and salvaged the mast head lamps. We were given several pints as condolence. “No, we couldn’t get any decent marks, nothing obvious to use and the sea was a bit too bouncy.

Three days later one of the customers was stopped by HM Customs off Newlin with a thee foot diameter propeller and about five meters of drive shaft hanging below his boat. He didn’t need the marks! He lost out again after finding the Juan Ferrer Navigator the year before. Never mind, it would soon be time to move operations to The Scilly Isles, HMS Association and The Hollandia.

Meanwhile, we had found a trailer mounted ex US military Air Compressor, in Cornwall and it looked like an ideal set for ECSAC. The introduction came from John Rhodes. A diver who was a friend of Lloyd Poulton who became an ECSAC member in 1966. John was involved with the Penzance Air Station and we became good friends over the many years of diving at Lamorna. More of Lloyd, John and the start of BSAC in Chapter Six.