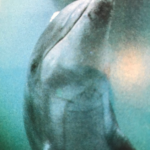 It was Easter at Lamorna. The weather was good, sea calm and I was taking a novice diver on his first sea dive. Unfortunately, I cannot remember his name but if still a member I’m sure he will remember Beaky. A bottle nose dolphin who was first introduced to the diving world by Horace Dobbs in The Isle of Man. He was known there as Donald. The full story is recorded in “Follow a Wild Dolphin”, written by Horace. In 1983 I met him briefly in Eilat, he was hoping to film dolphins in the Red Sea. There will be a copy of the book available in the ECSAC library shortly. (The story of our meeting with Horace and subsequent friendship is for a later chapter, our times in Devon).

We had Pat Heron as boat cover, he took us to Half Tide Rock, known locally as Wood Cutters Rock. We swam down the face of the rock and out to sand in 12 metres then followed the rocky shoreline towards the cove. The visibility was about 10 metres and we were having a great dive with plenty of Ballan Wrasse, Pollack, spider crabs and urchins. Suddenly I saw this wonderful creature swimming slowly towards us, I turned towards him and stood on the sand. I was wearing bright yellow neoprene gloves. (The best way to find the bottom in deep dives in Coniston, when your hands disappear you’ve hit the mud)! Standing with my hands each side of my head and in front of me the dolphin swam between my hands and investigated my mask. An automatic reaction was to stroke his head, which he appeared to enjoy. My buddy was delighted, (I mean we always introduce new divers to our world with adventure from day one).

After a few minutes of fuss, it was time to continue the dive. Beaky was determined to be dive leader and positioned himself between us, I held his pectoral fin and headed towards the cove. He seemed to be swimming with us for about 10 minutes, then he left us, presumably for a breath of Cornish air, then he came back to the same position to continue the dive. We came to a large rock and I indicated to my buddy we would go around the landward side, he signaled OK and moved right. Beaky moved left and no amount of noises and pressure from me would change his mind. So, we all went left, I swear I could see humour in a bright dolphin eye.

Time to surface! We three surfaced together, my buddy shed his set and weight belt and climbed into the boat, Pat was ecstatic and asking me questions whilst I hung onto the boat. I was aware the dolphin had moved away then I felt a gentle tug on my fin, he wanted to continue the dive with me, eventually I climbed in the boat and he swam away slowly towards the cove. We then saw a boat approaching at high speed with divers on board. They stopped alongside beaky who dived and surfaced again about 50 metres away. They raced over and two jumped in with a lot of noise. Beaky dived and disappeared. He obviously didn’t like this party!

Discussing the action of Beaky later, Pat said he appeared to have a bullet hole near his right eye and a wound on the top of his head. Horace confirmed he was shot during is stay in The Isle of Man and the head wound was caused by an outboard skeg hitting him at high speed. 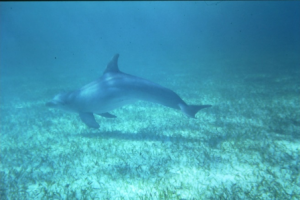 We never met Beaky again, but he moved along the Channel coast for several weeks and brought a lot of happiness to a lot of holiday makers.

I have had the good fortune to dive with Dolphins in other seas, this is one of a group of them who played around our boat off Andros Island in the Bahamas, they are always in a rush and we never met another as gentle or friendly as Beaky. 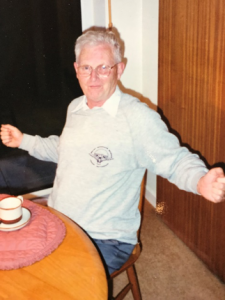 I arrived at the Baths for a Thursday night session and was told there was a potential member sitting at the shallow end of the pool. I walked across, introduced myself and asked if he would like to train as a Scuba Diver. He smiled and said” No  thanks, actually I am a BSAC First Class Diver, I’ve just moved to this area and would like to transfer my membership to this branch”.

Lloyd is an Australian who served in the British Army during the Korean War and in Egypt during the Suez Crisis. In the early 1950s he worked in the USA met John Rose an American diver and engineer who had developed a diving regulator which by-passed the Cousteau patent. This was marketed in the US as The Rosepro.  Lloyd bought one, brought it back to the UK and took it to Oscar Guggan at Typhoon. Oscar manufactured the unit under license and sold the Typhoon improved version as The Typhoon Scubair, the basis of the two-stage single hose regulator used today. The first stage was basically a modified welding regulator with a diaphragm reducing the cylinder pressure to 100psi. The biggest improvement was the later replacement of diaphragm by a piston operated valve making breathing much easier. Call me “Old Fashioned”, I still used my Draeger twin hose two stage regulator with a DIN threaded connector until the mid-1970s. 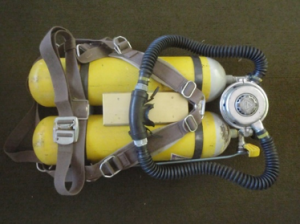 Early “A” cylinder clamps were sealed onto the pillar valve by a leather washer, needing frequent renewal. This was superseded by a hard nylon washer which lasted longer but was embarrassing when it blew out at depth. The pillar valve was slightly modified and fitted with “O” ring seal and this solved the problem. My fabulous Draeger set was the greatest thing since sliced bread! No contents gauge to look at, just a reserve valve, simple comfortable harness and it’s two stage regulator was a dream to use. I even bought a single cylinder version from/ Poulton when he succumbed to a single hose set.

Lloyd trained with the UK spearfishing team together with Reg Valentine and Laurie Emerson in the 1950s. The team trained in the navy 30 metre tower normally used for submarine escape training. The technique was to snorkel down to 30 metres, pick up a 6kg weight belt and surface. Reg had a dive school and boat in Giglio, he and Lloyd spent a lot of time exploring the area and discovered an underwater cavern the locals had never found. 58 years later this is still a great attraction and source of income to dive schools in the area.

I joined Lloyd on several First-Class Diver qualification dives. He said, “anyone who can dive with you and not lose you during the dive deserves to be first class”. The subject of the oral part of the examination was Lloyds choice. 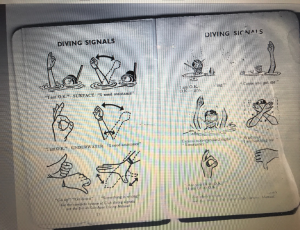 “We can’t afford to buy an air compressor, we don’t have sufficient money and we cannot borrow from the bank to raise enough”.  The plan to buy a compressor from Bruit and Pender in Penzance shot down in flames by the club treasurer at a committee meeting! After numerous money-making ideas were discussed a decision was made to ask the club members for a loan! If each diving member loaned £25, to be paid back from later air sales we could do it. All members were asked to an extraordinary general meeting, a vote was taken, and we could raise the money.

Pat Heron, Ken Jores and Pete Smith negotiated with John Rhodes, our friend in Cornwall, and the unit was delivered to Macclesfield Railway Station about one week later. It was then pushed by club members through the town and into the clubroom store. Sounds easy, but my word what a struggle!

The next move was installation. Pat Heron volunteered to produce a filter and connect it to the compressor outlet. This duly arrived and was a monster! Produced from the tubular axle of a steam railway locomotive, it was machined to fake “O” ring seals and connected to machined flanges top and bottom. The flanges were bolted together by eight 20mm steel rods. The complete assembly was approximately four feet tall and filled with activated charcoal filter media. The exhaust from the four-cylinder petrol engine was extended through the roof and fresh air inlet out through the wall at low level and we were in business1 All the members were repaid within a year.

We could choose dive sites anywhere, no need to hunt for air stations!

Then Neville Sheard, our Brewer went to Devon to buy a pub and bought a holiday camp, but that’s another story.