In 1955 our beer Brewer and my friend Neville Sheard decided he wanted to run a Pub! He had found one in Dartmouth in South Devon and was travelling the following day to negotiate. 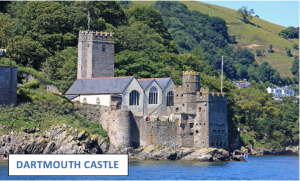 I had only been to Dartmouth once, travelling to Kingsbridge to meet a friend, Ann suggested we went across the River Dart by ferry, stop for lunch and then drive along the coast. Sounded good.

The Royal Dart Hotel looked over the fabulous river, so we had a good lunch and made plans to return and stop longer.

Neville did not buy his Pub, he returned with a huge grin, bubbling with enthusiasm and told me he had bought a share in a camping and caravan site. Deer Park Camping an Caravan Park is at Stoke Fleming, about a mile above the town with sea views. “Yes, the diving is good and his partner in the site knows Trevor Hampton, who runs a dive Centre at Warfleet Creek”.  With Neville, his wife Carol and their three children established, we pitched our caravan at Deer Park and I went diving! 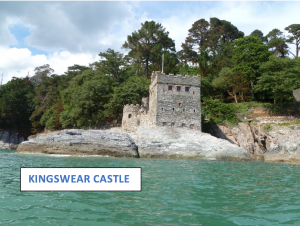 The town of Dartmouth is protected by two castles at the mouth of the estuary. Warfleet Creek is 200 metres upstream of Dartmouth Castle and Trevor Hamptons home and dive school had direct access to the creek waters. High tide offered about 4 metres of water. Here he provided basic training in Traditional, Scuba and Oxygen.

(Future dive site, I discovered six cannons 50 metres directly out from the crack in the rock at Kingswear Castle)

Advanced and traditional gear diving including explosives training was carried out from his open boat. With substantial fittings to cater for the heavy traditional gear.

Trevor formed The British Underwater Centre and he awarded qualifications on completion of the relevant course. Single course qualifications were: Men, Manfish, Women, Mermaid, Junior, Tadpole. If you completed all three courses you gained a Master Diver Certificate. I thought Lloyd Poulton would challenge him to a dual when he heard this, he has been known as The Master Diver for 60 years. He met Trevor and they subsequently became good friends.

Trevor trained Oscar Googan, Reg Valentine, Richard Dimbleby, Peter Small and many more, Then BSAC was formed and there was immediate conflict. Trevor would not accept the BSAC and French “Buddy” system, he maintained a diver should be alone, wearing a life jacket and supervised on the surface by a competent diver trained person.

Tony Aylmer owned a Swedish 20-foot cabin cruiser, “Nunky”. was a clinker built comfortable boat powered by a Sab single cylinder diesel engine. She had a direct drive to a variable pitch propeller, to put the boat into reverse.

Neville and I quickly talked Tony into taking us to sea and we dived several interesting sites. The Mewstone and the Eastern Blackstone are located to the North of the river entrance, the larger Mewstone offered protection at various sites at all states of the tide and we dived this several times. 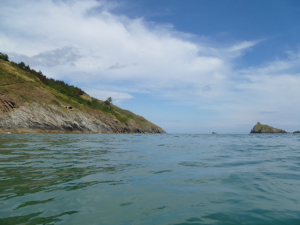 (See picture left) Outer Froward Point and The Mewstone. Eastern Blackstone is a dot on the horizon between the two’

Slack water in Start Bay and clearer water is three hours before and after High water.

At Spring tides, the channel between Froward and Mewstone can peak at about two knots, we planned a dive on The Blackstone and Tony suggested we anchored and waited for slack water inshore of the Blackstone, it was a superb sunny day and we had Ann, Carol and the children on board. After a picnic lunch we tried to raise the anchor, hopeless effort, we tried all the usual tricks to no avail. I volunteered and dropped in at the stern. I was surprised at the strength of current still running, reached the anchor chain and started down. The fishermen’s anchor was hooked around a stanchion of the handrail of a wreck. Although obviously old the vessel was in good condition and before I unhooked I had a look around. She is a Sea Going Tug. Sitting upright on a sandy bottom in 15 metres. At this time the Wheelhouse was still there with Wheel and Engine Telegraph intact.  I unhooked the anchor, surfaced as quickly as possible and shouted, “Get some marks 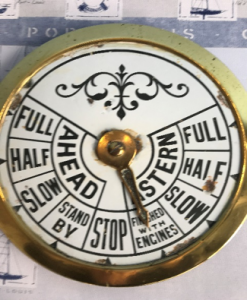 quickly, we were in a wreck”. It took me 10 years to find it again. By this time, the deck house and most of the deck had gone and sections of the hull were full of sand. At this moment I am looking at the engine room telegraph repeater, found when I discovered the Brass interconnecting chain and followed it, digging out the sand to try and find the engine number. There are no local records of the wreck, however Pat Heron researched it with local fishermen and a few pints of the amber liquid he found she was built in Holland, had left Brixham on her delivery trip and hit The Eastern Blackstone. We hoped the telegraph would have an identifying number, Pat had telephoned the builder and was amazed they had no record of the name of the tug however, if we could find the engine number they could furnish a name. We never found the number, however looking for other bits of the wreck that may be around, my friend and dive buddy Brian Sadler found a Merlin Engine and the remains of a hurricane fighter which had been shot down by a German Bomber in 1942. There were frequent attacks on Dartmouth at the time, local defence aircraft were based at Exeter Airport, a Hurricane squadron. The lone fighter had left Exeter and was still climbing, approached the bomber from astern and was shot down by the tail gunner. By an amazing coincidence a Royal Navy Destroyer had a full head of steam, about to leave Dartmouth when the aircraft was hit. Locals who saw this said the ship left the river at 30 knots and picked up the pilot almost before he got his feet wet!!!

Start Bay was used extensively from 1943 as a practice area for the proposed D Day landings. All the local inhabitants between Strete and Frogmore, including Torcross and Slapton were moved from their homes and the area was handed over to the military to play in. Live ammunition was used and many of the soldiers were killed when timing of bombardment from British Warships firing at the beach before a planned landing went wrong. The full story is told by Grace Bradbeere in her book, “The Land That Changed it’s Face”

One of the military casualties was a Sherman “Swimming” tank. Lots of Sherman tanks were equipped with a canvas skirt about 2 metres high. This was raised on a tubular frame above the tank accommodation cell and equipped with two propellers the tanks drove off the LCT (Landing Ship Tanks) the marine drive selected, and the tank swam to the beach. Unfortunately, the skirt on one of the tanks was torn by the tank astern in the queue to leave and it sank in 20 metres of water. The tank crews were equipped with a modified DESA oxygen rebreather and were rescued.

For over 40 years the tank was a wonderful dive, a mini island aquarium surrounded by fish with a cabin full of some of the biggest Congers ever seen. (They grow quite quickly during conversation in The Start Bay Inn). The dive was eventually ruined, by of all things “British Diver” the BSAC live aboard dive boat. 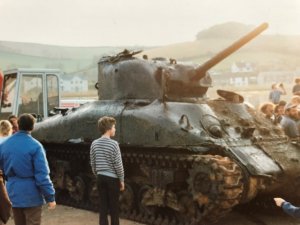 Air bags were used in a series of short lifts until the turret surfaced. She was then connected to a tractor at the head of the beach and towed onto the adjacent car park, were she is to this day. The amazing thing was after years in the sea the tracks rotated and the surface moving part of the operation was simple. Ann and I were there to see the operation.

The tank is now a permanent memorial to all the American servicemen who lost their lives during the D Day landings. It is in the Public car park at Torcross, between Slapton Lea and The Sea. The propulsion method and canvas swimming screen are illustrated and described well on drawings and script around the tank.

The admiralty chart of Start Point to Brixham is dotted with a number of wreck symbols, all “Position approximate” I have dived five of them plus The Tug and a Halifax Bomber which was ditched by the crew after being badly damaged over Germany.

Diving the deeper wrecks in Start Bay is a scary experience if you are leading and it’s your first dive down a shot rope you have dropped on co-ordinates you recorded during a time-consuming hunt around the PA on a chart. You soon move into total darkness, the only clearly visible thing is the shot line. You think this is stupid, I won’t see a thing, (You can still see clearly the shot rope. Then at 30 metres your world becomes lighter and suddenly it’s illuminated completely by hundreds of anemones (Dead Mans Fingers) all around the wreck. One, The Picton Castle is lying tilted to port, she is about 30 metres long and one particularly brilliant day, I arrived on the Stern and could see the sharp end, or where it should have been if she had not clumsily hit a German mine in 1918. It was possible to swim into the engine room and out through the hole in the bow. For years she was known to ECSAC divers as “The Unknown” until Tony Aylmer spent some time researching what are known locally as “The Red Light Wrecks” Three Wrecks, Picton Castle’ Bentham Castle and Greatham are within the red light sector of Start Point Lighthouse travelling South Steering to port brings you into the white light sector and you will not run aground on The Skerries Bank.

The two Castle ships are Grimsby Steam Trawlers requisitioned for the duration of the First World War by The Royal Navy and converted to Mine Sweepers. Both are lying in 35 metres Bentham is almost blown apart. The Greatham is a 3000-ton cargo ship torpedoed in 40 metres and is intact and upright but a bit too spooky to enter. 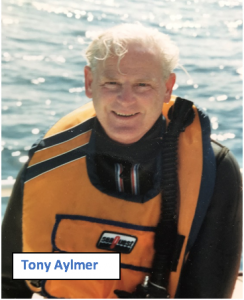 I found Deer Park was full of Divers from BSAC Branches from London Yorkshire and Nottingham. Air was available from Warfleet but at times to suit their operation, the alternative was Paignton, a ferry trip and return car journey. I had my little Cornelius set but there was a great opportunity to boost Neville’s income if his partner was interested. I suggested to Neville and Tony Deer Park could become I Dive Centre if they invested in a compressor and a shop selling Scuba spares and other small items of equipment. They were hoping to develop the site and had agreed to buy out the third partner but agreed in principle to my suggestions. I took Tony on a trial dive in Start Bay and he was hooked. He joined Torbay Branch and within weeks a ex navy air compressor was installed in the Deer Park workshop waiting for me to provide switchgear and wire it’s 10kW motor. Within six months Tony was charging cylinders overnight to keep the deluge of divers now camping at Deer Park happy. (Including, on average, 10 divers from ECSAC).

More next week, including the Halifax bomber, we found the Canadian Crew and they came to visit.