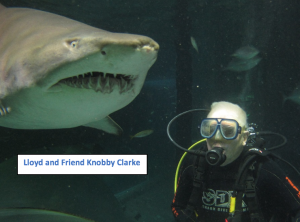 including Car manufacture in Crewe was closed and reformed by the receiver into separate companies. Lloyd Poulton was Production Director. He was offered a similar position with the new company but decided to resign. He accepted a commission in the RAF as a Glider Pilot instructor and examiner based at RAF Cranwell. He took the opportunity, moved his home to Grantham and became a member of Cranwell BSAC Branch. He had many friends in ECSAC and frequently travelled across to Macclesfield on Thursdays for a drink with mates and join in club dives when possible. The result was an even closer friendship with me, Pat Heron, Stuart Davidson, Brian Sadler, Colin Bingham and many others. Diving with Lloyd in Dartmouth we soon made Deer Park our base. Tony Aylmer, with an installed commercial air compressor developed a business, selling dive equipment and testing cylinders. This brought a big increase in the site occupation. The summer holiday period became an ECSAC annual club dive fortnight mid-July, more dive sites were investigated and BSAC branch members from Teesside, Kent, Torbay, London University and Cheshire joined us. The Branch had invested in a bigger boat which was a great success. “The Black Puddin” was 16-foot RFD inflatable with wooden floor, inflatable keel and a 40 hp Mercury outboard, I had bought an inflatable Avon 12-foot sport boat and 20hp Mercury outboard, with Pat’s “Puddle Jumper” we were equipped for good diving. The area covered on these trips was from Brixham to Start Point, round Start to Salcombe, Hope Cove and Newton Ferrers. 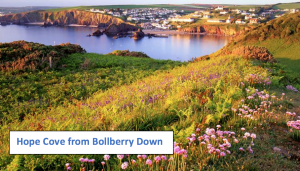 Launch sites were plentiful and we could find a lee depending on wind direction either side of Start Point. This made me very unpopular with the ladies! Relaxed and ready for a day at Blackpool Sands then, “Heywood COP” (change of plan),  “winds in the wrong direction, dives at Hope Cove”, a twenty mile drive with holiday traffic.

Talking about Trevor Hampton’s qualifications last week, I looked for photographs to confirm the grades after training. Not found a Manfish yet, the Tadpoles have all grown up to Frog Status, (Then I met my first 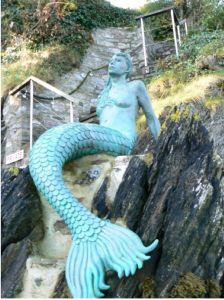 mermaid)! She is still in Warfleet Creek and badly in need of a wetsuit to warm the skin colour. I also discovered David Attenborough was one of the

Laurie Emerson became Landlord of The Start Bay Inn at Torcross in the late 1960’s. It quickly became famous for serving the best fish and chips in Devon, not surprising, the pub is on the beach, Laurie’s boat was on his doorstep and the local small boat fishermen were his customers. As a diver he was also a very useful contact, the D Day debris in Start Bay frequently snagged fishing gear. A quick call to Laurie and he was in the water freeing gear. A dodgy operation, alone and surrounded by net, as I found a few years later, by then I was based in Devon so calls came to me. Ann waited for my return and hosed me down in the garden to remove the smell of fish caught in the net, mostly skeletons surrounded by happy Spider crabs.

One of the objects he found was a Handley Page Halifax four engine bomber. Although the Avro Lancaster was the most famous of the wartime heavy Night Bomber squadrons were also equipped with other aircraft including the Halifax. This aircraft was flown by a Canadian Crew of seven on a raid over the Ruhr. Within the target area, an aircraft above dropped its bombs, one of which went through the wing of our Halifax. The crew dropped their bombs and jettisoned every piece of heavy / removable item they could, including all guns and ammunition. After a heroic and intense journey home, they reached Slapton Sands. The pilot aimed the aircraft out to sea and all the crew bailed out, landing on Slapton beach. The aircraft hit the sea about 2km off shore and came to rest in 20 metres on a sandy bottom.

When Laurie took me to the site I was amazed at the good condition of the aircraft after forty plus years in the oggin.  A large percentage of the alluminium skin had gone, the heavier gauge infrastructure including wings and engines were intact, all four propellers were bent back across their engines, but it was still a very large airplane. The aircraft is fitted with Bristol Hercules air-cooled radial engines, other variants were fitted with Rolls Royce Merlin’s. 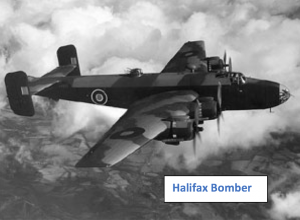 Hitting the water at full power every cylinder head had blown off due to the hydraulic power of the water compression whilst the engines were still running. I was fascinated, as usual, Heywood ever interested in seafood found most of the 64 cylinders provided a home for a brown crab. It was like swimming round Waitrose, lift a crab off the shelf, not big enough try the next cylinder!

At this time, the RAF did not have a Halifax bomber in any of their museums, salvaging this one was suggested; however, a complete aircraft was discovered in a Norwegian Lake and the Devon aircraft is still there, minus one engine which is now in the aircraft museum at Paignton.

The RCAF cooperated with Laurie and he managed to contact the pilot and other members of the crew, they travelled to Devon and were taken to the wreck site. They were not divers, so were given mementos from the aircraft and photographs.

Tony Aylmer and I bought a Dell Quay Fisherboat 19, an open GRP commercial fishing boat with a single cylinder diesel engine and room for six divers plus gear, a coxswain and surface support. Tony was now operating Dolphin Diving Services and took dive groups out whenever I was not using it. This meant the 2 weeks mid-July was ECSAC dive time.

The branch equipment officer at the time, Brian Sadler 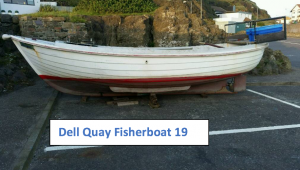 carried out the maintenance for me and was a regular diver on board. I quickly installed a Paper Trace Echo Sounder and a digital Decca Navigator to help our search for new dive sites. The navigator was the forerunner of GPS, it operated from three fixed transceivers sited across UK and Europe, a development of the wartime aircraft navigation System GEE. This provided numbers which the navigator used with Decca Charts, the numbers translated to the lined charts provided a position. This system was used by Decca for commercial use, the boat receiver and charts were hired by Decca and fishermen paid monthly for the hire. The result was a number of fishermen who could not navigate in Lat- Long using standard Admiralty charts, when the old system went out of use and the new Decca sets were available to buy. I was pleased to explain this basic navigation to seamen, some of whom had spent a lifetime at sea and new all it’s local hazards without a chart.

We called the Fisherboat “Gladys” a nickname given to Ann years before and still in use today by diving friends. She loved The Gladys Boat and quickly learned to handle her and boat cover for me on some of my ”Naughty” lone dives.

We arrived at Deer Park for our annual dive fortnight in 1955 and Tony informed me he had a young diver who wanted a dive the following day, he had told her I would provide a buddy and arrange a dive. I was not happy, was there with mates and wanted to dive with them. “Is she experienced” was my first question. “No, this will be her second sea dive, her other hobby is free fall parachuting but she thinks she will prefer diving”. She dived with us, loved it so much stayed two weeks and dived twice a day. Her name is Sarah Cunliffe, she made Scuba Diving her life and we became very good friends. (No, she didn’t take the crab, that was part of the evening barbeque) 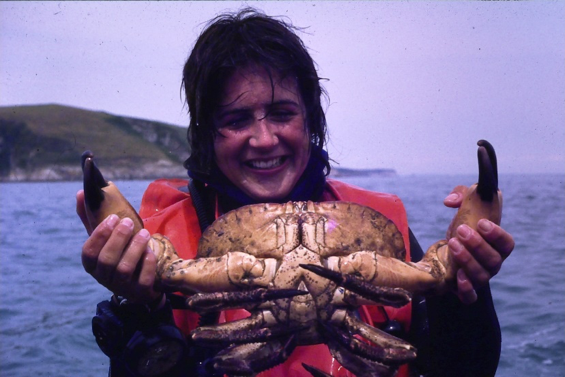 Sarah became interested in underwater photography and wanted to spend her life involved in commercial diving. (Like a lot of young divers at that time). She joined an ECSAC party of 15 I had arranged in Israel, not part of our plan, we met her in Eilat, she arrived under her own steam looking for a diving job. I introduced her to Willi Halpert, the owner- operator of Aqua sport, the organisation I had booked with, they needed a receptionist and hire equipment supervisor and she took the job. Years later she formed her own company, Big Wave TV and has produced hours of Great White Shark film including a recent ITV Film The Return Of Jaws. (More of Sarah in the future)

A major part of a Red Sea holiday at this time was the journey. There were no direct flights to Sharm. In1967 on June 10th the Arab – Israeli 6 day war ended and The Sinai Peninsular including Sharm El Sheik and as far south as Ras Mohamed was occupied by Israel. They opened up the area and started to build at Sharm. To get there we hired two Ford Transit and one Volkswagen vans, cylinders and weight belts and drove the 250 odd miles down the Sinai Desert. We stayed in The Maritime, the only hotel in Sharm. Three days later Sarah hitched a lift from the military and joined us. There were lots to see on the journey, but that is another story. (Just a little sample below..)