Andros is the largest of the Bahamas Islands and the least populated. It is only 90 miles from the Florida East Coast and is a popular weekend site for American divers. Ann and I made 4 visits, staying at Small Hope Bay Lodge. 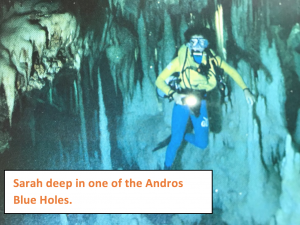 Sarah Cunliffe finished the Red Sea part of her “Diving career ambition” and moved to Fort Bovisand where she worked as an instructor, teaching the BAD Lads, (Basic Air Diving) for North Sea Oil Rig and other professional diving systems. She also worked with the Hyperbaric chamber as part of her diver training course. She was involved in medical research, using the Bovisand chamber for the relief of pain for Muscular Dystrophy sufferers. Then she moved to Andros island.

The island has a number of pools, which when viewed from altitude are deep blue, Sarah joined a group headed by Rod Palmer to dive, explore and investigate life forms within these “Blue Holes”. The complete story of the many dives carried out in complete blackness is recorded in Robs’s book and a TV film directed by Sarah, “The Blue Holes of The Bahamas”. The film was later presented by ITV. She also filmed lots of the life in the caves and discovered several new species.

On her return to the UK I dived with Sarah several times in Devon, I had made one holiday journey to Andros and she had been to Small Hope Bay. She informed me one of her cave diving partners Brad Purcell was just about to take the job of “Dive Master” at Small Hope We had planned a return visit, she wrote to Brad and introduced me. Brad had just returned from investigating the depths of Wakulla Springs in Florida. He had 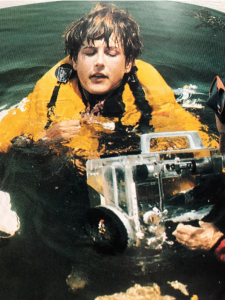 spent a month underwater, living in a habitat 18 metres underwater and making regular dives to 120 metres, recovering Mastodon tusks and Sabre Tooth Tiger remains. (those of us old enough to remember Johnny Weissmuller battled crocodiles in Wakulla during many of his Tarzan films. Brad told me they had crocodiles for company, but they kept their distance. (Obviously new about Tarzan).

Small Hope Bay Lodge consists of a number of palm thatched cottages around a central bar / restaurant amongst palm trees on a beach, there is a Jetty and diving is from a catamaran platform powered by two 150hp outboards. The reef table around the island average depth is 25 metres of superb corals and a great variety of life. The table ends about a mile off shore almost like a pavement. Extreme care is needed when you step off the pavement though! The kerb is 1800 metres deep! This is the second largest barrier reef in the World, dive depth over “The Wall” is restricted to 45 metres and only allowed under very strict supervision. The US and Royal Navies have a submarine base, “Autech”, on the Island, during most dives Asdic pings bounce off the wall, although I have never heard propeller noises. I imagine the Subs. are operating so deep and so far, away. On our forth visit the officers from HMS Dreadnought Nuclear Submarine joined us in the bar, Ann and I were introduced as the only British visitors and they joined us for a drink or five! The conversation soon got to diving and the area. Dick Birch, the owner and operator of Small Hope bought a scrap infantry landing craft from the US Navy ad sank it on the reef a short distance from the wall where it soon became crowded with fish of all shapes and sizes. One of our navy visitors said, “good dive today, you were diving in a wreck”.  We agreed, “there were seven of you, five very relaxed and two who were moving quickly around the wreck”. “Yes, two teenagers were swimming around every corner, how far away from us were you”? The answer amazed us, “about seven miles”. I said,” Could you tell what colour wet suits we were wearing”? The answer closed the technical conversation. “No but give us time”.

We had visitors from Dive America. A young couple, reporters for the magazine, researching the dive facilities available in The Bahamas, The Blue Holes in particular.  Brad offered to take them to a hole about a mile inland and invited me to join the party. Five of us, Brad and Ivan from Small Hope, myself and the two reporters packed into an ancient 4 x 4 set off into desert and jungle. It had to happen! The throttle cable broke! 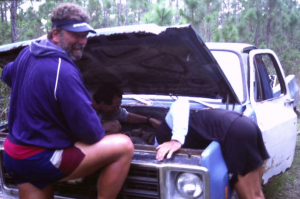 A length of cord tied to the carburetor lever, me standing on the passenger seat, head out of the sun roof operating the throttle, Ivan telling me when to close the throttle, and off to the hole.

It looked like a Duck Pond! We kitted up and I felt like a novice! I had a single hire set, the other four were equipped for deep diving, Brads comment,” Alan doesn’t use much air, we are not going to the bottom, probably a bounce to 40 metres”, didn’t help much. We dived, the first 10 metres in fresh water. The hole was bell shaped, the deeper we went the wider it became. At 10 metres we went through a thermocline and into brackish water, visibility reduced, and torches switched on. At about 20 metres another thermocline and into s 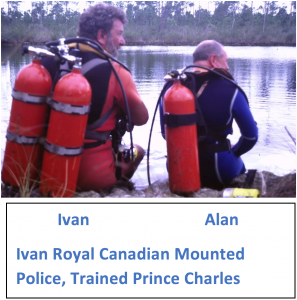 alt water and very good visibility, available daylight was good, reflected off the pale grey dead coral walls. I was surprised at the lack of life, I do not remember seeing any life at  all during the dive. Talking with Brad about this later he told me there are fish when you travel deeper and enter complete blackness there are species of sightless fish. We returned to Small Hope with my throttle jockey control, apparently Brad had left a time programme and instructions for a search if we did not return by a set time. Very sensible with vehicles ready to fall apart.

The following day Brad and I dived another Blue hole, entering through a cave in the face of The Wall at 35 metres, Resisting the temptation to gather a couple of Spiny Lobsters on the way in I 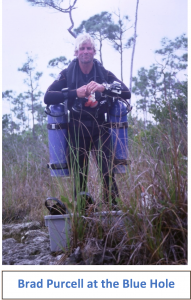 followed Brad into a tunnel at the rear of the cave. The tunnel roof lowered and I had to take off my set and push it in front of me for about 20 metres, plenty of width but limited height.  Now I know why Brad was using his cave diving rig, he didn’t have to remove his gear, plenty of width. The tunnel opened out into a cave, swimming on the cave became a huge cathedral with daylight above us and an opening onto the reef at 15 metres. Apparently, this opening is identified as a Blue Hole when seen from an aircraft.

A few days later, Brad said he had no divers booked for the day, “what would you like to do”. Approximately six miles offshore the American Navy had tethered a huge buoy to the sea bed. The mind boggles, a 3 metre diameter sphere tied with a rope 1,600 metres long to an enormous concrete block. I said, “lets swim down the rope”. We found the buoy, tied our boat to it and surveyed the scene! It was like a scene from Jaws, what’s down there? The answer was not much. I went down the rope like a rocket into an incredible Dark Blue world with a 50mm diameter steel rope disappearing into an even Darker Blue. I was at 45 metres, our agreed stop depth, I looked up and Brad was way above, so I retreated and joined him at 20 metres. It was like an aquarium, we were surrounded by fish, which I must have swum through. It was a strange sensation, small fish in large shoals but no predators. Then as quickly as they had appeared they left and alone about 10 metres from me was a Blue Marlin. What a superb creature, difficult to judge size, it left so quickly, I would estimate two metres long. A strange dive! An odd feeling knowing this is deep ocean, when you usually swim down to “The Bottom” to an object you have planned to see.

That was my last visit to Andros, back to Devon for a spell then a live aboard The Jean de la Lune to St Kilda, No large Groupers but Seals and thousands of Sea Birds. 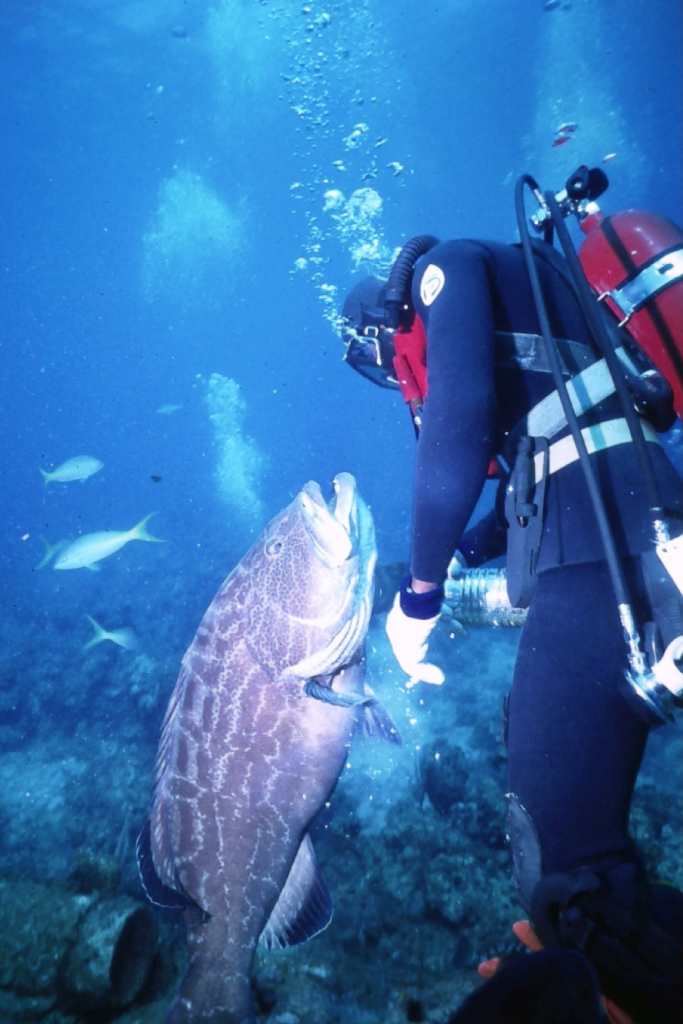