New Providence is the Main Island in The Bahamas Group. The Capital Nassau is the seat of Government, a great base for a holiday and plenty of choice of Dive Boats to show you the best dive spots. Most of these seem to be based on the remains of James Bond film sets, but forget these and look at the wild life!

Tony Aylmer invited Ann and I to join him on a dive holiday, a week in Nassau and a week in Andros Island. This was our first “Long Haul” trip and the second week we were to meet Arthur and Lorraine Chapman, Tony’s long-time friends from Chicago. Great, lets get in the water!

The local Dive Boat was controlled by NAUI, we were asked about our dive qualifications, no certification was requested.

After a 20-minute journey the boat was anchored in 15 metres and as a buddy pair we were briefed to stay in visual contact of the anchor marker and enjoy our dive! The anchor marker was a bright yellow plastic bucket tied by it’s handle to the anchor chain and filled with air. With visibility more than 30 metres this 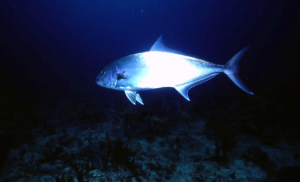 gave us a good dive area; the coral and sea life were different to my previous Red Sea experience and I really enjoyed using my new camera in it’s cast alluminium housing, 16mm wide angle lens and powerful electronic strobe. I took this photograph early in the dive, on my return to the boat I found it had been harpooned by a crew member. When I asked “why” he simply said “Supper”. I thought,” Heywood, don’t be a hypocrite”.

The problem with a lone fish photograph without a background, there is no indication of the size of the subject, the Jack above was 1 metre long. I offer the following as an indication of the need for something to give the picture perspective. 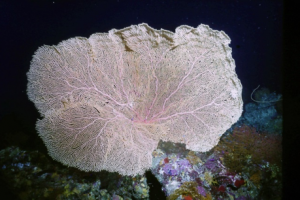 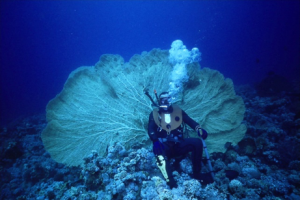 Picture one was taken during a shore dive made during a journey south from Eilat to Sharm in 1978. With no indication of size, even divers doubted my claim it was huge. During our club dive two years later, we repeated the dive and an opportunity to give perspective to the Coral in the shape of our rather large founder member Neville Oldham!

Back to The Bahamas!

At the time of our first visit we hired a car and dived several sites around the island, we decided on a hotel for future visits at South Ocean Beach on the opposite side from Nassau. Ann and I made several return visits to this village and I dived with buddies from China, America, Germany, Canada and LIVERPOOL. After a week at South Ocean Beach we flew to Andros, landing there at 6am, traveling in a 1950’s American taxi with no shock absorbers, every time the driver eating peas and rice breakfast at the wheel and delivering us to Small Hope Bay Lodge for breakfast at 7am and a dive at 9am.  The Dive Master for the first few years of our Andros visits was Brendle, a wonderful character, we immediately became great friends and I became a “Dive Buddy” to several people who planned return visits with us and one Canadian couple came to Devon and even dived on one occasion with ECSAC at Hope Cove.

On our second visit, Brendle took me to visit a new arrival in the LCI wreck’ 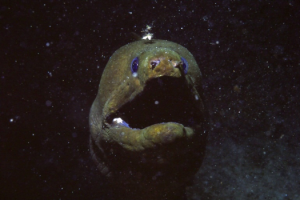 He came to meet us, I took this photograph, rather timidly, ‘cos he was a big boy and with only head visible it was not difficult to imagine just how big!  We discussed the Moray with Dick Birch (Owner and operator of Small Hope Nay Lodge) and suggested feeding the fish, he agreed and next day we dived together and carried some frozen conch and fish pieces. The results were quite dramatic. 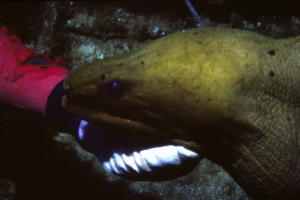 years, but this was different. Put a piece of food in front of a large grouper and the action of opening his mouth  creates a tremendous suction . The fish and occasionally a glove disappear instantly . After five minutes a large burp and the glove reappears and put back on the hand. Mr. Moray was different, Drop the piece of fish and immediately he had is head in the fish container for more. 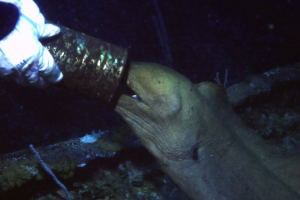 No more fish? Throw the can down and swim away, collect the tin later.

I am sure we have all fed fish at some time! Bread collected at the breakfast table and a great feeding frenzy of damsel fish arounf for a few minutes, then the bigger boys arrive and the scene is quiet again. Angus and I decided to improve on this and find some shrks to feed. 6am dawn dive to Shark Reef, A long snorkel, I was leading and to say I was a bit apprehensive would be a massive understatement. Suddenly a vice like grip around my right thigh, I thought “Shark”. No, it was Angus, both hands round my thigh and a big grin! “We’ve forgotten the bread”. I never found a shark in many dives in and around Sharm.

Two years after the Moray feeding I returned to Andros. Brendle had left to sail around the World with his girl friend and Brad Purcell was Dive Master. On the boat out to the dive I asked the Dive Marshal if they were still feeding the Moray Eel? “oh no he’s gone” was the reply, “Left last year”.  Most unusual I thought, he had a good territory, why leave?  I discussed this with Brad later and was told the true story.

Dive Marshal with can of fish followed by dive group to the wreck. When he arrived, the Marshall dropped a piece of Conch and Mr. Moray came out and took it. The marshal looked round to find his divers were still descending the shot rope about ten metres away. He put his hand over the tin to wait! The Moray would not wait and grabbed his forearm above the tin of food, practically severing it. Dick Birch flew him to Florida were the military medical team put him back together.

My next fish feeding occurred off the island of Baros in The Maldive Islands. I was alone and returning from my afternoon freediving trip around the Island. A breakwater formed by a coral wall had been constructed about 50 metres offshore, forming a shallow lagoon. I was swimming across this and recognized a pair of legs in the thigh deep water and a hand passing bread titbits to a group of fish about 400mm long, It was Ann, feeding bread to 10 baby Black Tip Sharks, who were really enjoying the treats, So was Ann, “Good job Mum and Dad aren’t around” I said. Her only comment was “Aren’t they superb”

The Island of Baros was approximately 250 metres long by 150 metres, maximum altitude 2 metres. A German husband and wife team ran the diving operation expertly and the accommodation and catering were exceptionally good. My daily routine was, breakfast 7am, boat at 7:30. Most of the Baros holiday makers were German early risers who in best tradition placed there suit, fins, mask and snorkel on the seats shaded by the roof awning, leaving the lazy English out in the sun. .Lunch at noon and second dive 2pm. Early evening I snorkeled out to the reef and spent an hour free diving. There was a sandy base along part of the reef and there were always white tip sharks lying there. The depth was 40 metres, after a few practice days I found I could  swim to the sand then about 50 metres along then surface. I was in my 40’s then, now at 84 (Next Week) I don’t think below 10 metres would be worth even considering.

On one of my freediving sessions I was lucky enough to approach a huge Tuna. He was stationary at a cleaning station, I watched as long as I could, then my sudden movement sent him off at high speed. A wonderful experience. Inevitably, I found a pet Moray, Discovered during a dive at about 20 metres on the local reef, I had a daily visit and  after a few days started to stroke under his chin making noises at the same time into my snorkel. Great fun< then one day I thought, if this chap grabs a finger I will really be in trouble, no way can I hope to pull probably 5 feet of Moray Eel out of his lair and up to the surface, I stopped the stroking! 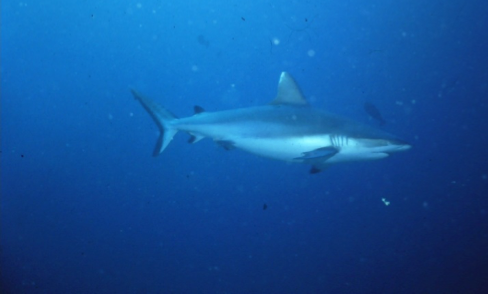 I went on a Shark Feeding Dive! Two Dive Marshals positioned 12 of us, backs half way down a coral wall, then threw a bucket full of fish pieces in front of us starting a feeding frenzy of reef fishes. Within 10 seconds 6 white tip sharks appeared. More fish another bucket and they came closer and numbers increased. When all the food had gone I noticed a new arrival watching and about 20 metres directly ahead of me. He had missed the feast and wanted a taste. He accelerated so fast I could hear the tail beats. He was angry, back arched, pectoral fins pointed downwards and was approaching fast. I was using a Canon  35mm camera with a 16mm lens in a cast alluminium housing and a large electronic strobe,. I think I must have red too many Hans Hass books, he would have hit the shark with the camera! I just took a photograph, the flash turned him, and he disappeared. 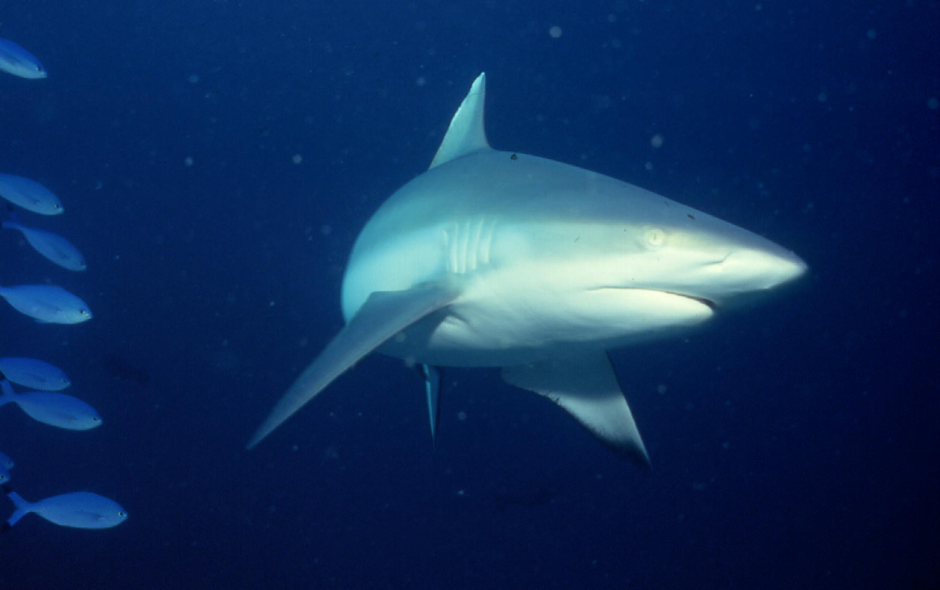 It was so impressive; the speed of acceleration was like watching a Scalextric car being switched on. I was not scared at any time, although my buddy, who was behind me, said a finished sitting on his knees.

Shortly after our visit a young woman Dive leader was killed feeding sharks, she was holding a fish at arm’s length and the shark took her arm.  Hence, please don’t feed the animals. Hans Hass also said “sharks cannot reach you if you hold on to their tail”. True, then he found one type that could – so its best to leave them to it.

Unfortunately Chapter 13 will be delayed by a week, it’s my birthday May 1st and I’m having a weeks kayaking!