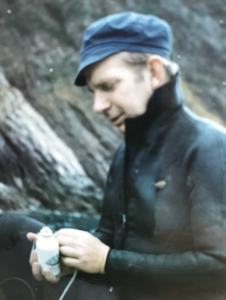 Pat Heron (Pictured right), Ann and I were having dinner at Ardnagashel House, when a terrific commotion started about a mile off shore. Red flares, flashing lights, loud shouts and a ships siren sounding repeatedly. I am sure there was not as much noise when the Titanic sank! Colonel Kaulbach, the hotel owner was muttering, to nobody in particular, “I suppose their boat and complete crew will arrive shortly, drink all my brandy and use the phone all night, like last time this happened”. I had dived on the remains of “The Last Time”, a Spanish trawler hit the rock several years before and could not be towed off the rock she was so badly damaged. She was scrapped, and all the above water steelwork removed, only bits and pieces remain below water.

It was 2.45 am and a policeman was waving a torch at me whilst holding onto a massive bicycle! I was driving through the deserted main street of Glengarriff heading for the Harbour in Bantry. “Sure, your either up very late or very early Sor”. The police man was even taller than his bike! “I’m early, a Spanish trawler hit the half tide rock off Ardnageshell and I am joining my friend with our boat and diving equipment to investigate the damage or help if she sank, we need to be there at low tide”. The policeman looked baffled. “You know you’re the second fella to tell me that story within the last 15 minutes” he said. Obviously, he had just met Pat Heron. Pat had his caravan in a farm site next to ours. He knocked on our door at 2am to say “A (he always called me “A”) if we are going to be any use to this Spaniard we need to be at Bantry pier before low water at 3am”. I dressed and left Ann in the caravan and the company of the Worlds loudest donkey. Every morning at first light he gave a few tuning up grunts, then gave his rendition of “The Donkey Serenade”, this lasted for about 30 minutes, just to ensure every person in the village was awake.

I arrived at the harbour to find a Spanish trawler with a few dents and scratches, A Watson Class Lifeboat alongside, Pat, the trawler crew and the lifeboat crew, tucking in to a breakfast of fried herring, bread and large glasses of Spanish Brandy! She had managed to reverse off the rocks at high water. I joined in the feast!

The lifeboat crew were amazing, I think the oldest member was about 20. Most of the small crew were teenagers. There were no modern Nav aids, not even Radar. They had travelled around The Head of Kinsale the up the 22 miles of Bantry Bay in fog with a crew member lying on the deck in the Bow, trying to see under the fog and directing the coxswain when they had reached the navigation buoy or shoreline he was navigating too. (I did a similar job on board Quadrille years later up a French river to an anchorage in Tregoe, Brittany. I was at the helm and Skipper Dennis shouting bearings to steer to the next buoy. Brilliant bit of dead reckoning estimating leeway, I found all 10 buoys before we too hit the Brandy).

The technique for finding the Bantry Harbour entrance at night in those days (1960’s) was to look for the lights of the hotel we were in then turn to port, heading for a red light on the harbour wall. (A 100-watt lamp in a wall mounted bulkhead fitting) to stay clear of half tide rocks mid channel. They missed the hotel lights and turned to starboard too late when the harbour light came into view. Unfortunately, their turning point  with a direct line to the harbour light put them on a course for the rocks. Bantry folk were eating herring for days after.

Bantry Bay in County Cork is a wonderful dive site. 22 miles by 10 miles at it’s widest point, sheltered, clear water with lots of marine life, including Seal Dolphin, Porpoise, plus the best selection of crustaceans ever. On our initial visit, the local net fishermen were catching so many salmon they were using them as bait for their lobster pots.

We had Pats “Puddle Jumper” for transport and two of our usual ex US Airforce Cornelius compressor for air. (Half a cubic foot of air each to 120 Ats. 20 hours running time per fill). We had a ball, plenty of seafood, Guinness on tap and the sea 10 metres from our caravan. Seals became a nuisance. We met seals every dive, they followed us everywhere. On one memorable occasion, when we surfaced Pat asked me, “was that you who barked at me when I was swimming down that gully?) Too much of the Guinness. I think! 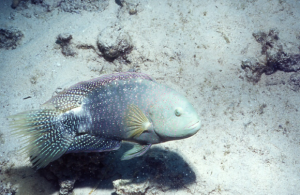 It was easy! Fly from Gatwick by British Caledonian airways or Dan Air direct to Eilat. Stop at The Caravan Hotel for a few day to pick up diving gear from Willi Halpert’s “Aqua Sport” dive centre, Hire Vans at Hertz and make a few discovery dives from the hotel doorstep.  Taken on a night dive on “Moses Rock” a 50metre swim from the beach below the Caravan Hotel, this little Mauri Wrasse followed me around after I gave him a morsel of bread. Only six inches long all Tail and mouth, he was the only one I met during 10 two-week shore diving holidays in The Sinai Peninsula.

Our first visit was with Tony Aylmer and Lloyd Poulton. We met at Gatwick, had dinner together at our hotel and flew out early the following morning. Most of the passengers were divers, each carrying normal holiday luggage plus diving equipment. Cylinders and weights were hired in Eilat, but every passenger carried a huge dive bag plus suitcase. Nobody was charged for excess baggage at check in and hand luggage carried on board consisted of cameras, regulators, masks and depth gauges, Take off  seemed to go on for ever. Compared with todays controls and baggage restrictions it was wonderful. Not so on arrival! The final approach to the 1,900-metre runway appeared to be down the city main street, aircraft approach at roof top height. I think all the pilots were trained by the navy on aircraft carriers. Touch down was within the width of the painted strip across the end of the runway and the landing appeared to end in the desert..

On arrival passengers were quickly passed through immigration and on to security! There you realised this had recently been a war zone. Individuals were directed into a narrow cubicle. Inside was an Israeli soldier with a sub machine gun. He questioned you on the purpose of your visit and if you were carrying any photographic equipment or weapons. If yes, when leaving the cubicle equipment was inspected and you had to prepare and sign a list of the equipment. This was countersigned by the customs official and you were informed the list was to be produced when you returned to leave Israel, the equipment produced to prove details. This was apparently to prevent expensive equipment being smuggled into the country and sold on the black market, the entire operation and the atmosphere was a little scary. Ann arrived to join me vowing she would never come again. That was before we walked out into the heat of the desert with no humidity.

After a quick check in and a meal at the caravan we met Willi Halpert, collected our equipment and walked to Moses Rock. Tony Aylmer had a holiday in Israel a year before and new the local dive sites. We immediately named it “The Goldfish Bowl”. It was wonderful, Clown fish and Sargent Major fish everywhere and lots of very large Parrot Fish chewing away at the Coral. I had seen it all on television, but this was the first time for real.

We collected our hire vehicle, a VW van converted to carry six divers plus gear and drove through the original Egyptian Border Crossing to Coral Island. There was a feery boat available to take divers to the 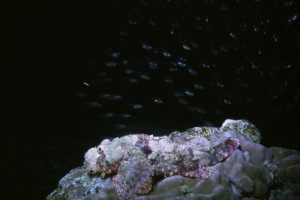 island. The plan was to walk across the island and dive the seaward side. Time to concentrate on photography! I had a Nikonis 3 with the standard 25mm lens and an electronic strobe which could be unclipped and used remote from the camera. There was no shortage of subjects and I exposed all 36 frames of my slide film in minutes. Fortunately, I had discovered a huge group of Glassy Sweepers and moved towards them when I discovered this Scorpion fish watching them. I became obsessed. I photographed them at every opportunity for the next 25 years. This was the first, about 50 centimetres long and looking very docile. I couldn’t be bothered with the ferry back to the mainland so indicated my intention to my buddies and swam round the island and back to our van. My first impression of Coral Island, it’s size and distance off shore I thought this is remarkably like Mousehole island. I have swum around this,, from the harbour and back, many times so why bother with a ferry. A good decision, I found a number of huge table corals on the way back, blast, no film.

After the Six Day War the Israeli army built a military road from Eilat to Sharm el Sheik. This shortened the previous 3-day journey to 8 hours. Half way down the peninsular is the oasis of Dahab. This was quickly developed as a dive and holiday centre and renamed Di Zahav. 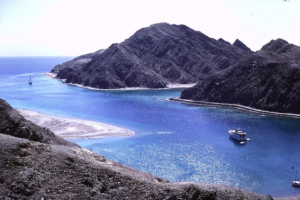 The road was superb and we dived several sites on the way, Di Zahav had been furnished with a seemingly endless supply of fresh water by a pipeline running 10 miles from a supply in the mountains Cultivation was available, a Kibbutz was formed and crops of Avocados and other fruit and vegetables produced. During later visits we soon found Avocado with Mayonnaise and a bottle of Maccabee Beer makes a very good picnic lunch. 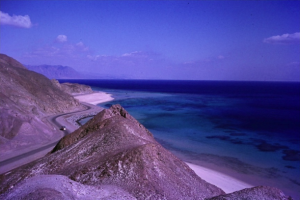 On from Di Zahav we travelled to Sharm and checked into The Maritime Hotel. At the time this hotel and 12 Fibre Glass Igloos with Aircon were the only accommodation available at Shar el Sheik A crescent shaped road had been built around the bay for future development  but with whispers of a possible return of Sinai to Egypt building had stopped.

Again, all our diving was shore based including a wonderful dive at Ras Mohamed after a hair raising drive across 30 miles of desert road and a walk across a coral table 500mm deep and a drop off to 70 metres. The most incredible feeling of vertigo at the edge. This is the junction of the gulfs of Sinai and Suez and at that time a very important strategic point. The army had a lookout post based on a huge vehicle full of electronics and bristleing with heavy machine guns and three very bored soldiers who joined us for beer and Avacado. We dived in the Gulf of Suez and I met my one and only Manta Ray, Great.