“Where’s that?” was the usual question when we said that ECSAC was diving in the Azores. (Broadly speaking these beautiful islands are mid Atlantic approximately 900 miles west of Lisbon).

We survived the rigors of flying with TAP although some of us required stopovers in Lisbon in order to do so. Lisbon itself is a beautiful and extremely safe city which merits a visit in its own right. 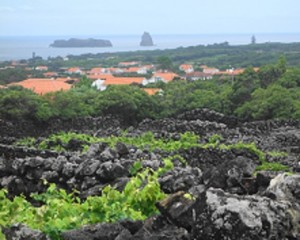 19 of us arrived on Pico (the island takes its name from the volcano which at 2000m + dominates the sky line). We were taken to our hotel which was situated 9km outside the main town of Madalena. The hotel was spotless, the breakfasts marvelous and the views over the vineyards and the sea were stunning.

We had 5 days diving with Gary and Lindsey who own and run Twin Peaks Dive Centre in Sao Roc. The diving was predominantly shore based, from a variety of sites around the island. Morays groupers, octopus, nudibrancs and wrasse were easy to spot in and around the crevices and boulders.  Depth hounds descended to 47m to see the black coral on the last day.

One group took a RIB over to the Island of Sao Jorge for a day to dive the caves and the hardier amongst us endured the two and a half hour RIB trip from Madalena out to Princess Alice Bank, an underwater sea mount, to dive with the mobula rays. The end of course justified the means, as seeing these graceful creatures in the clear blue waters of the Atlantic was pretty amazing. 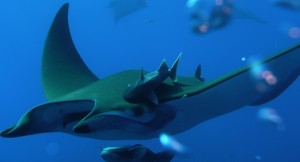 Our 2 non divers had an equally fruitful trip out to Faial to go whale watching. Not only did they see sperm whales but pods of dolphin entertained them on the way. Azorean history is bound up with the sperm whale. Did you know they ground whale bone into flour? 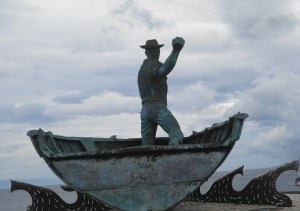 Pico itself is largely unspoilt. Black volcanic rock is used in constructing houses and the hundreds of dry stone walls that protect the vines.  The square in Madalena was the meeting place for families and tourists alike. We were entertained by local choirs, brass bands and traditional dance groups. Restaurants were small and family run so eating out was very enjoyable.