After worryingly misty run down the weather cleared and gave us beautiful clear blue skies. Saturday’s started with a second breakfast for some and flag training for others. 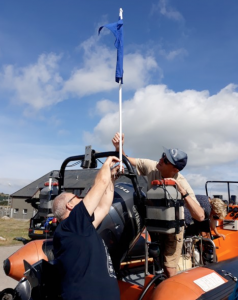 The diving began just off St Tudwal’s Island with the ‘Challenger’ which proceeded to live up to its name. In heavy swell, it proved very difficult to shot and even more difficult to dive with viz limited to about 30cm. It soon became test of buddy skills, use of finger reels and hardy constitutions.

The second dive on Saturday couldn’t have been more different. The isolated reef off Pen-y-Chain headland was only a 5min run from Pwllheli harbour and produced multiple sightings of lobster, starfish, prawns and crabs plus a variety of fauna and a few more queasy stomachs.
It was then back to the bunkhouse at speed in order to celebrate Helen’s birthday at a local restaurant, the Porter’s Cave. 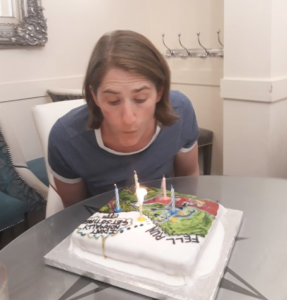 We think it was a big one but the birthday girl has yet to confirm or deny. Thanks to Clive for the cake which the restaurant brought out in style with singing and candles.

Sunday saw the club at St. Tudwal’s Island again, but this time on the eastern side, for a dive in Two levels Cave. 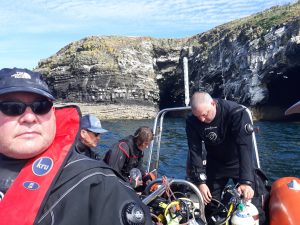 In complete contrast to Saturday the sea was flat calm with bottom temperatures of 17 c and blue skies. This naturally brought all the idiots on jet skis and in small craft who can’t read a dive flag or understand a surface marker buoy. That said, hoods and gloves were rapidly abandoned.
A seal was guarding the mouth of the cave but she didn’t want to play. Later a sad possible explanation came with the sighting of a dead seal pup on the cave floor. Otherwise the divers also reported sighting a particularly long, bright orange pike fish, a multitude of tompot blennys and wrasse of all shapes and sizes, starfish and lobster. The viz (3-5m) and views were so spectacular that some divers proved difficult to persuade out of the water. 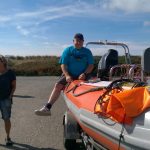 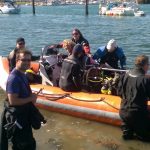 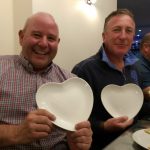 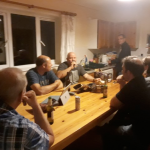 Thanks to Mike (now rechristened Dave for some reason) and his glamorous assistant Helen for putting the trip together and to Jon Green and Sue Wainwright for towing the boats.