Report by Pat and Phil.

We arrived at Scrabster on Saturday morning to load kit into the dive containers. Nick and Claire had driven overnight. Everyone else had chosen the comfy bed option at various points on the A9. The ferry took the 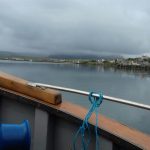 long way round Hoy to get out of the swell. We finally docked in Stromness, unloaded and sorted out our kit aboard the MV Halton. We ate out at the Ferry Inn. 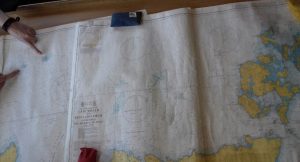 Anderson showed us the wind and swell forecast for the week. We had a 2 day weather window to get out to North Rona before we needed to steam for the cover of the North coast of Scotland. Five hours and 45 miles out from Stromness, having spotted dolphin and porpoise on the way, we arrived at Sula Stack, an exposed rocky outcrop, for our first dive. The swell had taken its toll as several of the group were rather seasick. The vis was around 20m with rocky gullies at 32m. The wreck of SS Manina was strewn across them. The dive site teemed with life: pollack, cod, wrasse and cat shark with lobsters conger eels and ling within the wreckage. . Boulders and walls were a riot of colour, provided by deadmens fingers, white striped and dahlia anemones, club sea squirts, nudibranch eggs, feather stars, spiny starfish and jewel anemones. Sponge, edible and velvet swimming crab were tucked into the cracks and crevices.  It was quite a challenge to get back onto the boat given the swell and current but what a site: surfacing out in the open with the stack towering 100 feet in the air and  gannets circling overhead.  7 hours later we arrived at North Rona, dropped anchor in order to get some shelter from the rolling seas for the night. Congratulations at this point to John Rushton as this was his introduction to Scottish diving.

We headed out to Sula Sgeir, 11 miles from North Rona. The first dive was a series of gullies. The kelp line was around 23m. Those who went right found a high energy site plastered in life.  Those who went left were buzzed by seals demonstrating how to cope with surge. Deadmens fingers, hydroids, anemones and a wide variety of sponges provided the colour.

Our second dive was a cave. The surge across the kelp was a definite case of 3m forward and 2 m back. Cat shark were on the rocky sea bed coiled around the kelp and each other. We dropped down a wall covered in deadmens fingers hydroids and fried egg anemones to the cave floor, the entrance to which was a series of smooth well scoured boulders, a hiding place for lobster and velvet swimmers. The walls were covered a variety of sponges.   The surge, gloom and overhead environment were a timely reminder to monitor gas and time carefully.

We headed back to North Rona for our 3rd dive, a dark cave which if followed to the end exited on the far side of the island. Bob offered a trip onto the island to see the puffins and lighthouse as relief from the constant movement of the boat. 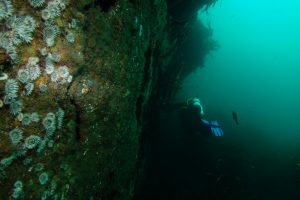 The weather window closed as we made the timely 6 hour run for the entrance to Loch Eriboll in order to dive Eilean C. This site started with a block of limestone at 4m covered in kelp with tiny nudibrancs on the fronds. Vis was about 12m. Shoals of juvenile Pollack swirled around us as we descended to a cave at 25m with large boulders at the entrance. Sea hares, velvet swimmers, dahlia anemones, sponges and sea squirts were seen. We finished the dive with a wall covered in deadmens fingers anemones, sponges and hydroids. 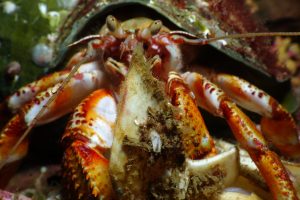 Our second dive was further along the coast at Eilean nan Ron. This was a superb site for those who love squidge. We descended onto a cobbled seabed punctuated by large boulders. Short red seaweed teemed with prawn. Deadmens fingers, plumose, fried egg and dahlia anemones, antennae hydroids, sponges, sea squirts, covered the boulders. The back of the first cave was a graveyard for mauve stingers. The second cave had long clawed squat lobster under every boulder plus lobster and edible crabs. We finished along another colourful wall followed by a slow ascent watching large Pollack, Ballan and Cuckoo Wrasse and shoals of fry swimming in the current. We headed into Scapa Flow and Lyness to shelter from the incoming windy weather and to allow us to put our feet on dry land.

This was the first time Sarah, John, Claire and Clive had visited Scapa Flow. We dived the classic wreck of the WW1 German cruiser, The Karlsruhe. She lies on her port side in 26m. The vis was 10-15m.  Shoals of

mackerel flashed silver at the bow. The whole wreck was plastered in plumose anemones. Devonshire cup coral glowed in torchlight.

The afternoon dive was The Tabarka one of the block ships. A negative entry into the current to land in the kelp was executed with absolutely no style or finesse. We dragged ourselves via the kelp to the side to fin to the bow. The current forced us back to the stern. 30 minutes later we had slack water and managed to enter the main area. Turquoise blue light streamed through the structure. Shoals of juvenile Pollack flashed in and out of the shadows. We ended the dive with a drift away from the wreck to deploy a DSMB. We moored at Burray, which allowed us to walk to The Sands Hotel for a quick drink.

The first dive was the impressive wreck of The Koln, another cruiser which lies in 36m of water on her starboard side. We explored the deck trying to identify the winches, davits, mast, and guns at the bow, the battle bridge and the grills. The wreck was covered in brittle stars and plumose anemones A very inquisitive seal accompanied us throughout the dive.

The Hurdles(imagine an electricity pylon with its top removed) was our afternoon dive. Brilliant vis and a sandy seabed plus the structure itself was home to horse mussels, maerl , hermit crabs ,dog whelk, velvet swimming and decorator crabs, sea toads ,tube and white striped anemones.

We moored at Graemsay , which allowed us to walk along  a deserted beach , watch a beautiful sunset and finally to head to bed with the intermittent flash of light from the nearby lighthouse.

We dived the deepest and darkest of the cruisers, The Dresden. We descended the shot to the stern and then explored the deck of the wreck.

We finished the day on the F2 and Barge and a drift to collect scallops.

A very pleasant evening meal at the Ferry Inn rounded off a fabulous week.

Thanks to Bob, Rachel and Ainsley for taking us to the remotest island in the UK and  to dive buddies Ken, Clive, Jane, Tim, Claire, Sarah John and Nick.

Looking forward to seeing Bob and the Halton in 2019 to explore the Northern coast of Skye and in 2020 to revisit Norway. 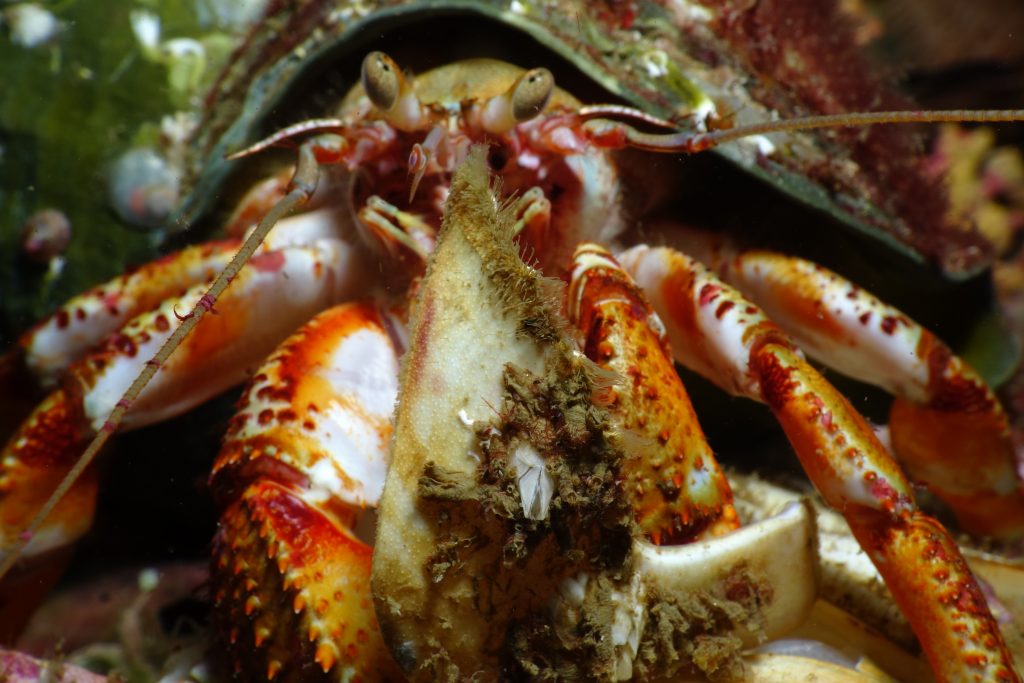 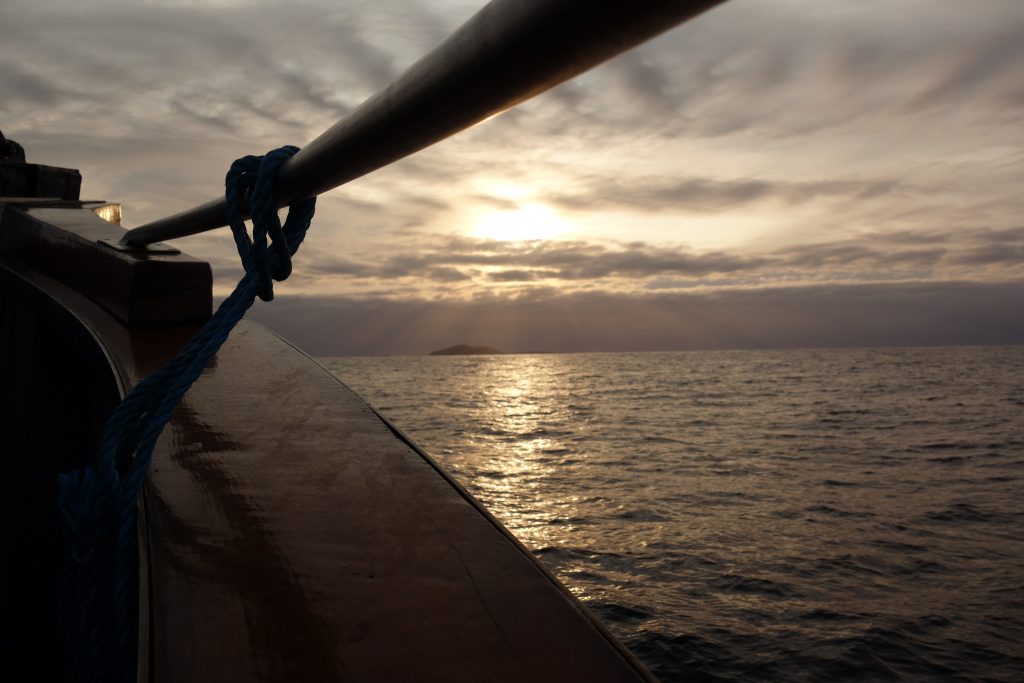