ECSAC Visited Malta for a week of wreck and reef diving and a lot of beer by the looks of it..  😉 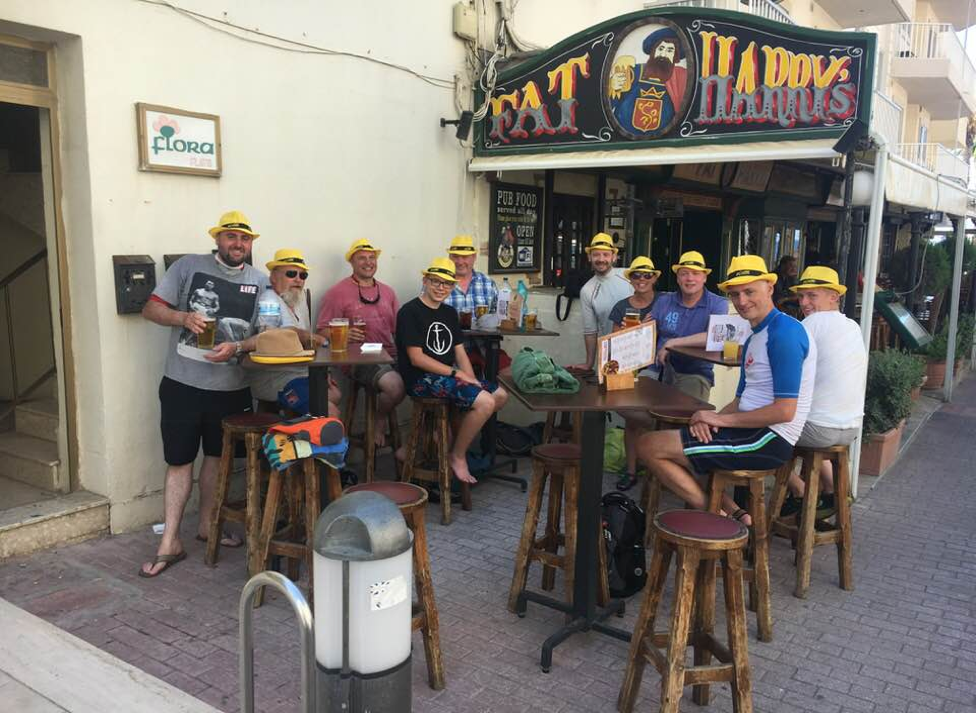 After a short flight from Manchester (3Hr) we landed in Malta for a weeks diving. As we were all arriving at different times we arranged to meet in the bar “Fat Harry’s” to start the trip off in good spirits. We dived with “Buddies” who are based in Malta. Martin and his team looked after us very well and ensured we all had the correct paper work (Note if you are 45 or older and smoke you MUST have a doctor medical to dive due to the recent changes in Maltese law). Martin assigned Elka as the dive guide for the week with the help of Louis. Our team was a mix of non-divers who stay on shore visiting the attractions of Malta, and 10 divers with a range of qualifications from Sports Diver to Advance Diver.

Dive 1 – The Two Tugs 22meters, Due to the direction of the wind we headed down the island and did are first dive on the two tugs that just lay off the rocky cost. This was a nice check out dive and everybody’s kit was working fine.

Dive 2 – The Margite 20M, After stopping at the Pasty shop for lunch we arrived a Valetta harbour to dive the Marite. We new the viz was poor in this area but was a good option due to the wind direction. We kitted up, stride entry into the harbour then dropped below the boats. The Viz was not good for Malta but still around 4 to 5 meters. The wreck was broken up but still an enjoyable dive.

Dive 3 – Um El Faroud 30M (Stern), The wind had dropped so we were back on plan ,plus the other part of are group had arrived in Malta, the divers from BSAC Aquatech. We kitted up did a forward roll entry into the bay (Mossy doing it 3 times for a laugh). There was very little current making the finning to the wreck easy. We did the Stern section first as the wreck is so big. This was a great wreck to penetrate and most ventured into the engine room, leaving the wreck we 120bar to ensure all had enough air for a deco/safety stop in the bay. 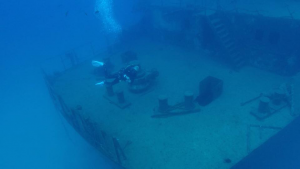 Dive 4 – Um El Faroud 30M (Bow), After some lunch in the local restaurant we jumped back in again to dive the bow section, this is further away as the wreck is split in two and again there was an opportunity to penetrate the wreck through a long corridor with a ladder and hatch at the end. This wreck was most peoples best wreck of the week.

Dive 5 – P29 35M, this wreck was situated in Cirkewwa near the ferry terminal to the other islands and only a short drive away from the dive centre. The wreck was used by the Maltese coast guard and then decommissioned and made safe, before sinking it for divers to use. There are plenty of swim throughs including a very small circular hatch which Will tried to get me stuck in.

Dive 6 – Rozi 35M, is in the same area as the P29 and is sat upright. It was purposefully sunk in 1991 for Captain Morgan’s Underwater Safari Tours, intended as a submarine tourist attraction. It proved too expensive to run however, so it is now purely left for divers to enjoy. Entry is from the shore, and the swim over is from the reef towards the wreck which is marked by a huge yellow buoy. As we approached the wreck the stern appeared in the clear blue water. We dropped down onto the stern and worked are way through the wreck, again there were plenty of swim troughs. The wreck is intact, except 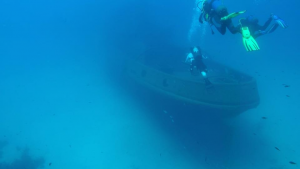 for the engine, propellers and rudders which have been removed. A thorough explore of the wreck can be done before you enter any decompression and the return swim to the reef acts as a slow ascent to off gas. We explored the reef and there are a couple of swim throughs in the rock itself including a small statue of a saint and arch swim through. 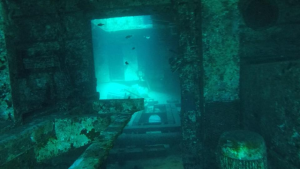 We got picked up and headed to the Harbour in St Pauls Bay where we kitted up and transferred our kit onto a converted Maltese fishing boat. After a 45min motor we arrived at the first dive site the P39. This was the same type of ship as the P29 we had dived  earlier. There were other dive boats on the site and as we descended we could see the other divers coming out of the wreck finishing their dive. We had plenty of time on this wreck and all treated the wreck as an underwater playground finding different ways through it. Eventually we ascended and carried out our safety stops mid water looking for our boat as the skipper had moved it to the other end of the wreck, only a couple of divers had a surface swim. This was a really nice dive, we then headed on shore to a local cafe on Comino for lunch.

Dive 8 – Comino Caves 15M was the second dive of the day. We arrived at the site with a dramatic cliff coastline, we kitted up and stride entry into the sea to be immediately surrounded by schools of fish (The bread taken from the hotel may have helped) before fining into the network of caves and swim throughs. One of the cave openings looks like a large “Z” had been cut into the rock which we swam through into and cavern, perfect stop for treasure but unfortunately none was found.

Dive 9 – GOZO, Inland Sea 25M was a earlier start at 07:45am as we had to catch the ferry to Gozo. The crossing was short and conditions again where fantastic. Then a short drive on Gozo to get to the inland sea. We enter the inland sea via the jetty and surfaced swam to the opening in the cliff face avoiding the small tour boats. Here we descended and keeping low and to the left of the opening so the boats would not hit us. Once over the first few rocks the depth soon increased allowing us to fan out and enjoy the view of the very blue colour of the sea beaming through the opening to the open sea. Once in the open sea side we did a wall dive before returning back into the inland sea.

Dive 10 – GOZO, Blue Hole 30M was a bit of a trek with the dive kit over the rocky shore to reach the Blue Hole. But once there we descended into the hole and then out through the archway in to the open sea. Here we dived the swim throughs that have been created when “Azures Window” collapsed and few years ago and then onto a chimney carved in the rocks and ascended to circling back at a shallower depth. We entered the cave at the bottom of the Blue Hole looking for eels but sadly found none. We then entered the Blue Hole again and ascended to the surface avoiding the bikini fish.