Diving with Len Bateman aboard Predator. 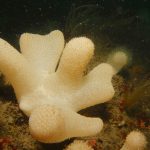 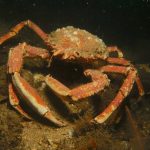 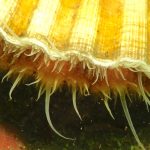 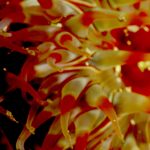 We were so lucky to have 4 days of sunny weather with calm seas on days 1-3. We did however have  7m tides which dictated the dive sites available. The water temperature was 10C and the viz between 3-5m The wind picked up on Easter Monday as we dived the Dakotian . It was quite a surprise to surface in choppy seas and a force 5 wind blowing.

We met each morning at 9am and returned to the marina about 5pm.

The dive site was a large boulder slope which led down to a rocky reef. Cat shark, octopus, numerous spider crabs, masses of scallops, 3 species of nudibranch, double spiral worms, lobster, edible and velvet swimmers were seen. The boulders were covered in a variety of hydroids, bryzoa and sponges.

Wreckage scattered amongst kelp covered boulders. A variety of sponges plus crevice sea cucumbers provided the colour .The constant surge had some buddy pairs back on board after 30 minutes.

Puffins, guillemots, fulmars, kittiwakes, plus seals on the rocks and beach, greeted us as we arrived in the sheltered bay.

We picked a depth and then drifted gently along the face of the wall which had ledges, cracks and crevices to explore. A wide variety of life including large orange sea fans , cat shark, squat lobster, butterfish, leopard spotted gobies, crevice sea cucumbers, nudibrancs, edible and velvet swimming crabs, a variety of sponges, hydroids and large Ross Coral .

(if you ever dive here in July beware of the trigger fish).

The Dakotian—a cable layer which was hit by a mine. The stern is the most intact part of the wreck. Viz around 3 m due to fine silt.  Jewel anemones and Devonshire cup coral provided the colour.

Thanks to buddies Tim, Ken, Wilf, Dave, Janet, Anna and Mark . Sadly Clive was unwell and had to go home.