Fred Santos and Mark Hickson joined Mark Paisey in Cornwall to complete their combined Sports and Explorer Mixed Gas SDC. The first dive was in 10m of water and focused on skills and drills required for mixed gas diving….principally getting used to the kit and diving off a RHIB. This dive lasted 82 mins and covered AS, CBL, mask swopping, shutdowns, stage handling and reg switching, buoyancy and trim culminating in a DSMB ascent. The second dive on air was to 42m on the Germaine a steam ship torpedoed in 1918. Vis on this dive was 10m and had a runtime of 52 mins. Some skills were practiced but focused primarily on managing the runtime and diving the plan. The second day saw first mixed gas dive on U1021 a U boat sunk in 1944. She lies intact apart from the bow in 50m. We dived this on a 20/30 mix and the vis was around 10m. The U boat started from Bergen before hitting a mine off Trevose Head. The third day saw a dive on the Svint a steamship which sunk in 1916 in 54m. We dived this on a 20/35 mix. The vis was amazing at 20-30m. This wreck was 5 nm offshore and had an intact secondary steering gear and wheel intact. Runtime on this dive was 55 mins and everyone loved it. Best dive in UK for Fred. That completed the course for Fred and Mark ( having completed a theory exam ) but tomorrow we plan the HMS Regina in 58m…  A Canadian destroyer sunk in 1943 which lies 15nm offshore. This is UK diving at its best and I forgot to mention the Dolphins. 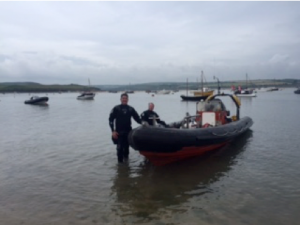 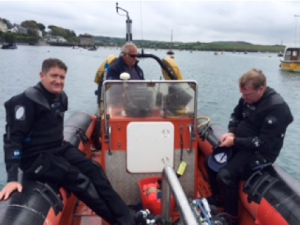