A number of blearily eyed divers assembled a mountain of kit and loaded Top Cat in Rhoscolyn Car Park at 06:30 am before launching and departing shortly after 07:00 am for the 12 mile journey to dive the Roanoak, an American supply ship torpedoed in 1945. Despite a challenging dive to 49m in extremely dark conditions treasure was located and lifted before returning to Rhoscolyn, the receiver of wreck has been notified. 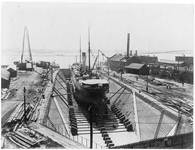 After lunch we headed out into a freshening sea to look for Ocean Gain, a 20m trawler which sank in 1988 but has never been located, with little trace of the wreck on the scanner it was decided to dive Maen Piscar pinnacle where the wreck of the Havso rests. We returned to Rhoscolyn and recovered Top Cat at 17:00 after an extremely long day. Unfortunately the weather was true to forecast and the wind increased further which prevented us diving on the Sunday.