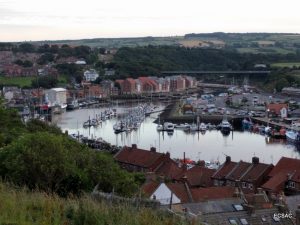 So far for 2016 ECSAC has dived the north, south and west coast of our fine land. We decided to venture to the eastern edge to complete the set. Whitby is an old harbour famous for intrepid explorers such as Captain James Cook and Bram Stokers Dracula. We did manage some exploring and downed plenty of fluid!

Friday saw an earlyish start for those who had taken the day off. With the M62 clear we all arrived in good time and had the boat launched and kitted with time to spare (very un-ECSAC). A short and gentle motor our of the harbour 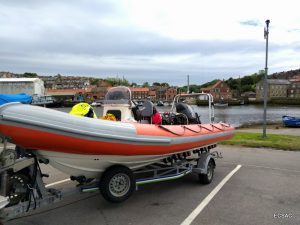 was greeted with a slight wind and off we headed for the main objective – to successfully shot the wreck of the UC-70. Lying in approx 25m of water the UC-70 was primarily a mine laying sub from WW1 and was sunk in 1918 by a sea plane. Sounded at the first attempt and shot at the second pass a longer than expected wait was endured before the first divers were in the water. Having done a complete lap of the 49meter vessel with 4m viz plenty was seen and all 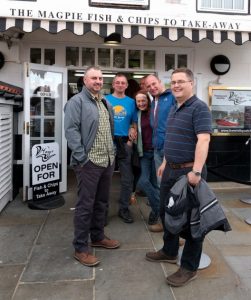 agreed a second look was worth it the next day. With the shot recovered the short motor back to Whitby harbour was filled with plans for fish n chips and maybe a beer (or 2). Following a quick shower and change at the B n B we then set about finding the infamous Magpie Cafe for fish and chips and a stroll along the north of the harbour. Afterwards we debated which pub looked best so decided so should test all 3. With full tummys and sleepy heads the B n B was a welcome sight.

With a full complement of divers and a change of Cox`n for Saturday we quickly set sail again for UC-70. Having moored Topcat on a pontoon saved the hassle of launch and recovery and was also cheaper too. Choppy water made the motor out to the dive site a l 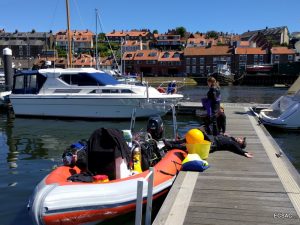 ittle wetter than expected but as divers who would have thought a few “little” splashes would have mattered? With the wreck shot, dived and recovered with unerring accuracy and speed we decided to pop to the pastie shop adjacent to the harbour wall. While a willing volunteer collecting the order, still dry suited, a bemused crowd wondered why James Bond was walking through Whitby with a bag full of pasties? With full cylinders, and stomachs, we set off. Our problems started when we arrived at the GPS marks to find 30m of water beneath! Some head scratching was followed by coordinate checking then searching the internet to be sure we had the correct location.

With no alternative we looked to James Cook himself and went exploring! Thankfully after a short time a can was spotted at the correct depth and with the first divers in it was a pleasant sight when we descended onto the wreck! She lies in a starting depth at 7m to the top of the many boilers and descends down to 17m and the stern. Day 2 had been a success 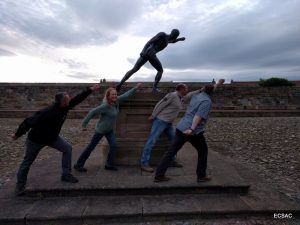 so following quick showers we formed a mini coup and went to a Turkish restaurant for a lovely meal. The evening was then free to explore Whitby Abbey and the beautiful views from the west cliff and search for Count Dracula himself. Working off the evening meal up the 199 steps (although we didn’t count them) to the Abbey then required another debate over which pub to try again. Unable to decide we went back to the B n B early (only kidding). 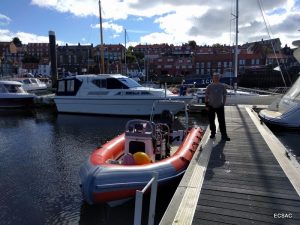 glorious sunshine, clearing skies and an eagerness to get back in the water. The planned wreck of the Polruan lies in 27m of water just outside the harbour and again we managed to locate and shot with great efficiency. With some time to spare we investigated some wreck marks in the area with good soundings and grins with future adventures planned. A slight current on the wreck left the divers exploring different parts of the site than the cox had requested but with SMB’s deployed 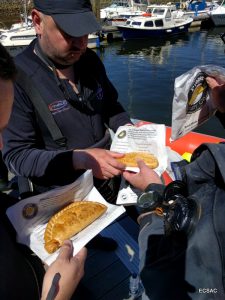 safe recovery was simple. Another pastie run on the way back into the harbour (although James Bond was different this time, much like the change to Daniel Craig) and then the task of recovery to complete. 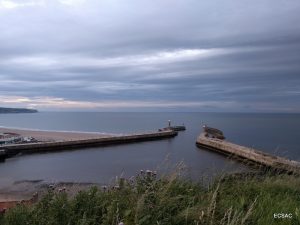 Although Whitby might not be the land of the rising sun it has a beautiful coast with plenty of wrecks to explore. Yorkshire tea, fish and chips and Theakstons beer just add to the attraction. For the ladies even James Bond might be there next time?