Top Cat was repaired, prepped and checked at home during the week before it was towed on Friday evening to Bridlington.

Phil’s meticulous research, organisation and attention to detail had the group in the hotel car park on Saturday morning at 6am ready to drive to Hornsea boat yard. The chances to dive the lightship LV83 are minimal. During the short dive season for Bridlington Bay 2019, there are 3 opportunities when the journey time to the site, the slack water window, tractor launch and recovery coincide. We were so lucky that the weather on the day was favourable. The wind direction in the previous week had been predominantly westerly, the swell was 0.2m and the wind speed 6knots.

Top Cat was loaded and launched without incident. We passed the wind turbines, then the gas platforms and crossed the shipping lane before completing the 28 mile journey to the dive site. Phil had 3 sets of marks from 3 different sources. The search for LV83 began. We all watched the plotter anxiously until it came into view. The wreck was shotted 3 times before we were confident that it was on LV83. We waited for the buoys to indicate slack.

What a dive. The viz was around 8m. The wreck sits upright and is intact, sunk following a collision with a Spanish trawler in 1967. As it came into view all we could see was colour. Every surface was plastered in white, green and orange plumose anemones, interspersed with big patches of different coloured elegant anemones. Shoals of Bib and juvenile Pollack inhabited the holds. Ballan Wrasse and Ling were tucked under plates and into small spaces, accompanied by huge lobsters, edible and velvet swimming crabs. Nudibrancs, Tompot Blennies —even the insides of pipes and funnels were covered in elegant anemones.  As we left the wreck to ascend the shot line, we could see the whole of it sitting on the seabed. We eventually recovered the shot and returned to Hornsea. Was a 10 hour day for a 40 minute dive worth it? Absolutely. 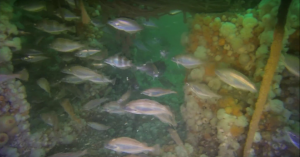 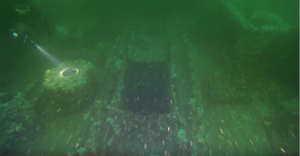 The weather was less favourable on Sunday with the wind picking up and turning southerly. We decided to dive UC39, a WW1 mine laying submarine sunk by HMS Thrasher. It lies on its starboard side with its outer hull open, revealing the steering controls. The viz was around 3m. Surfaces were covered in elegant anemones with Crystal nudibrancs adding a splash of iridescent blue. Huge lobsters were spotted under plates and shoals of Bib swam around the conning tower.