A team of ECSAC explorers joined Wreckspeditions aboard the Starfish Enterprise this weekend for what promised to be a great weekends diving. And it delivered. To quote Fred “the best skipper he’s ever had!”.

The gang arrived on Friday night and settled in to the accommodation with a few beers.  Ropes off was at 8am so we gathered together at Kip Marine for 7:30am where Jason met us and briefed us on the day ahead. 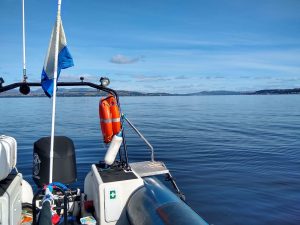 Starting with the SS Wallachia a cargo steamer that went down in 1895 after being hit by the Flos in fog. Vis was approximately 2m but everyone had a good dive with Mike and Fred finding some very smelly bottles of stout. Average depth was 34-28m

The second dive was on the MV Akka; a large bulk cargo ship that ran into technical difficulty which led it into the Gantock Rocks. A great wreck with multiple dives needed to get it all in. Covered in life. Simon located some Buttons that look like they belonged to a crews uniform so that will be being reported to the ROW to see if there’s any museum interest! Most of this wreck was around the 30-26m mark.

Back to the holiday park, showered and off to Largs for an all you can eat Curry, a few beers at our favourite Ye Old Anchor pub and then home for another early start.

Well overnight we seemed to have an epidemic of illness. Clive awoke with a horrendous cold, as did Steve. Mike pulled his back and so 4 explorers remained.

Fred, Simon, Helen and Vesta went out to the SS Kintyre, a small cargo passenger ship. In 1907 she was lost after another ship plowed into her side whilst doing a nautical mile time trial. Her stern was pretty smashed up but her bow is beautiful.  This was the deepest of the wrecks starting at 30m and going as far as 50m. Fred and Simon quite enjoyed this dive and ended on a scenic assent along an old pipe covered in lots of life up to 5m.  Alas Helen and Vesta had to cut the dive very short when Vesta had a wobble and Helen kept a very calm head as she helped Vesta ascend back up the shot line.

After this dive we lost another explorer as Helen went back to check on Mike, and then there were 3. We ended on a lovely scenic dive on a very large abandoned military jetty with masses of life on it and around it. A great way to end the weekend.

Highlights of the dive charter. Jason was incredibly knowledgeable and helpful. We’ve never known a skipper take all your kit from you, take it to the rhib and sort it, then also swap your cylinders for the second dive. A great set up with a multitude of hot drinks and homemade baked goods for between dives as we headed back in to the marina. Would definitely dive with them again! Especially for the hot chocolate with marshmallows and whipped cream!