As you are probably aware we have had some problems with the Deltas engines and a complete failure on a recent weekend trip to the starboard engine. A new fuel pump has been fitted and tested using the flushing ears but I wanted to give the boat a proper test at sea.

With some favourable weather predicted earlier last week we organised a small team to take the boat out for a test and ultimately if all ok to dive whilst we were there. The sea trial brief was agreed by Kevin and we were all set. It was not a formal trip with the usual protocol due to a few possible variables with the engines and the last thing we wanted to do was get a full weekend and then the boat let us down at the 11th hour.
So with an early 7am start from the club house we headed off to Pwlhelli. On arrival we launched the boat and tested the engines and found to be all in good working order. 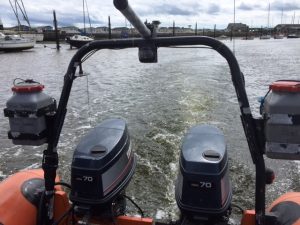 The boat was loaded and we set off on our adventure to a new wreck site the LLandulas a 72 ton 20 metre long Granite carrying Schooner. Jon green coxed the boat out to the wreck giving the engines a jolly good thrashing. Taking advantage of the flat calm conditions.

A team effort with Jon at the helm and Simon deploying the shot. It would transpire later that the shot was right on target.
We had the pleasure of having two rebreather divers on board Dave Moss and Mike Hood and we arrived on the dive site without an alarm or bleep in ear shot which was quite amazing or did I speak too soon?
Simon & Amanda first in and down the shot line they went. Dave checked his kit and found that the YBOD (yellow box of death) had decided to select a high set point and had been injecting pure o2 into the loop during our passage out to the site and left nothing for the dive. Oh Joy.
We quickly changed plans and Dave coxed the boat whilst Jon, Mike and I jumped in.
To say the visibility was poor was an understatement max 2m at times. I arrived at the wreck with a thud to find the shot inside the hull. Great shotting. With the visibility so low we stayed in contact with the gunwale which is the best part anyway with lots of plumose anemones, dead mans fingers, a tiny nudi branch and plenty of small crustaceans. After several circuits of the wreck and 45 minutes dive time we headed back up the shot line.
Poor visibility but good to get out onto something different and we all enjoyed the dive.
Back to Pwlhelli for comfort breaks and a spot of lunch with the plan to dive the sea caves for the second dive.

We met up with the BSAC Northwest sea search team and in particular Wendy from Hartford SAC who were carrying out a survey of the seabed out in the bay.

So we headed out to the sea caves on St Tudwals East Island.
Dave coxed the boat due to the o2 episode earlier. We arrived on site in a very timely manner with an average speed of 22 knots! Typical Audi driver

Kitted up in our pairings again and we jumped in. Visibility much better at this location up to 5 metres which is less than it has been in recent weeks. Plenty of life around and another Nudi branch found by our resident spotter Mike Hood. Plenty of wrasse, juvenile fish, nice lobster and shrimps but no seals on this trip. All back on board we headed back to the marina to recover the boat and start the trip back to HQ.
Great outcome with the engine and boat trial along with a nice bit of diving as well.
Not a bad start to Mikes opening dives with ECSAC.