Phil and I had wanted to dive the Norfolk chalk reef having read the Sea Search East report earlier in the year. Following several emails full of information from Dawn, the Sea Search East’s coordinator we decided to run an exploratory club trip using Top Cat. 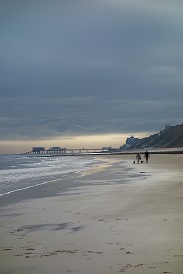 We prepped the boat on the Tuesday evening –a bigger task than expected as the trailer brakes had seized solid and did the final check on Thursday evening. The journey to Cromer was busy but interesting as the hills of Derbyshire gave way to the fields of Nottinghamshire and ultimately to the small villages and agricultural landscape of Norfolk. Our accommodation was a rather nice chalet at Norfolk Park, North Walsham.

We launched from the slip at East Runton—an experience in itself, given the steep decent onto soft sand, pebbles and then hard sand into the sea. We dived in two buddy pairs, Steve and Ken and then Phil and me.

The reef itself is 30 miles long, with an average depth of 11 metres. It is a mixture of bright white chalk, flint and sandstone, boulders cobbles, pebbles and coarse sand. Erosion has left pockets, holes and tubes in a variety of shapes across the reef, consequently it teems with life. 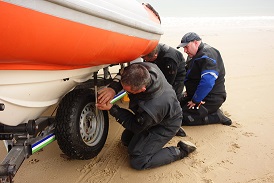 The first dive was a drift from East Runton to Cromer, the second a slack water dive at Sheringham The absence of silt and kelp and viz at 6-8metres was a bonus. Lobster, squat lobster, edible crab, velvet swimmers, juvenile sea toads, sponge crabs, prawns and sea spiders were in every hole. Many of the large lobsters were out walking across the reef.  Light from our torches caused dragonets and blennies to dart from one place to another and the squatties to scuttle for cover. Sponges, dahlia anemones, star sea squirts and short red seaweeds provided an array of colour.

Recovering Top Cat was a serious problem solving activity which provided the local chalet residents with much to talk about and then applaud as Phil finally towed it up into the car park.

An evening meal at the hotel where Steve and Becky were staying   completed a super days diving.

We had a slack water dive at Cromer and finished with a slower drift on a different part of the reef from East Runton to Cromer.  Again good viz and an abundance of life including Cat Shark.

Top Cat’s recovery was quicker but still a challenge. Now we know why the local dive club shore dive!!!

A very different weekend’s diving and a trip which we plan to repeat.