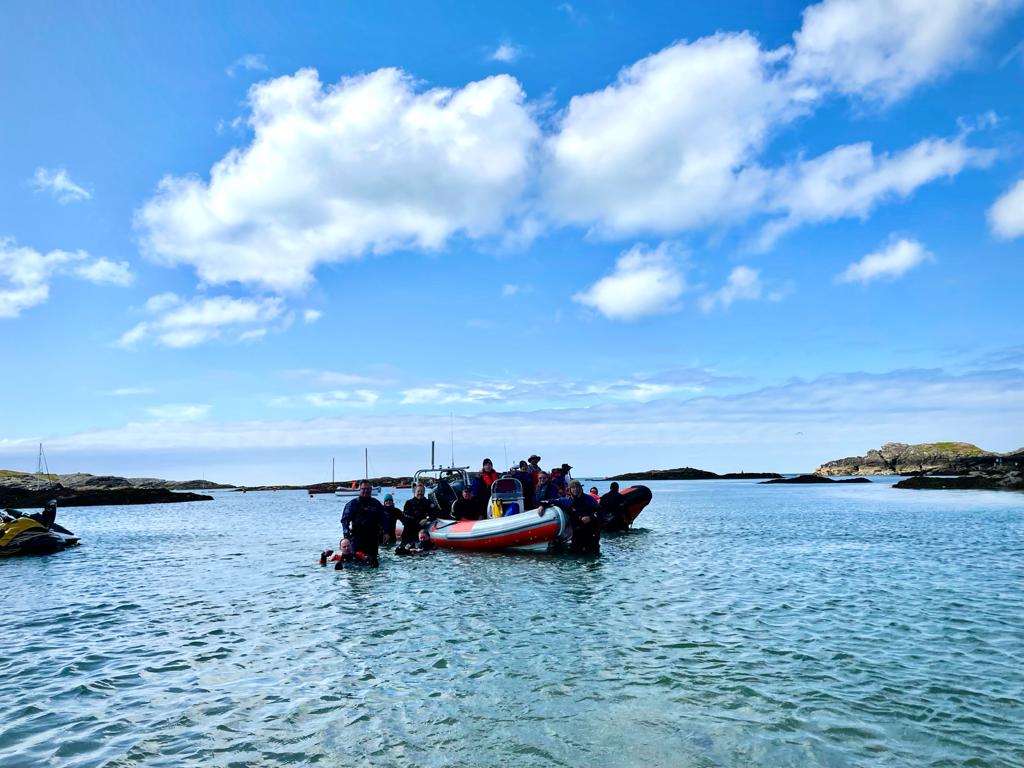 Having originally planned to stay at in the GoGarth dormitory at Anglesey Outdoors, we were forced to find alternative accommodation at short notice following the continued Covid restrictions in Wales. Fortunately we discovered the Holyhead Sea Cadets accommodation and wow, was it good. The Sea Cadets could not have been more helpful. All the divers were able to stay there and we had the BBQ there on the Saturday evening using the Cadet’s gas BBQ.

Following another last minute problem (with Steve’s new car), Si B stepped in and towed Top Cat to Anglesey while Jon towed Cheshire Cat as planned. We all met at the Sea Cadets and had fish and chips and then decided to walk down the road to the Kings Arms in Holyhead where we were invited into the beer garden and treated to our very own disco! A great start to the weekend!

Despite a forecast of gusting winds, we arrived at Trearrdhur Bay on the Saturday morning, as planned, to find that the sea conditions looked favourable. We loaded the boats in preparation for a tractor launch and set off at around 10.15 am.  Our first dive was on The Missouri, an iron steamship which sank in 1886. The visibility was quite good despite the recent storm.  We explored the boilers and followed the rope in the sand back to some other areas of wreckage amongst the rocks where there were shoals of bib and pollack, small gobies in the sand, large wrasse and a conger eel.  A discarded foil balloon and string was removed from one of the boilers.

After a quick turnaround at Trearrdhur to change cylinders, have lunch and use the loo, we set off for our second dive at the Chasms.  We were dropped in near to the gullies and swam along the rock face, with a blob up, in a gentle drift dive.  We saw lobsters (sadly some in pots), velvet swimming crabs, starfish and deadmens fingers and a very photogenic tompot blenny and then made our way away from the rock face before ascending and swimming back to the rhib. 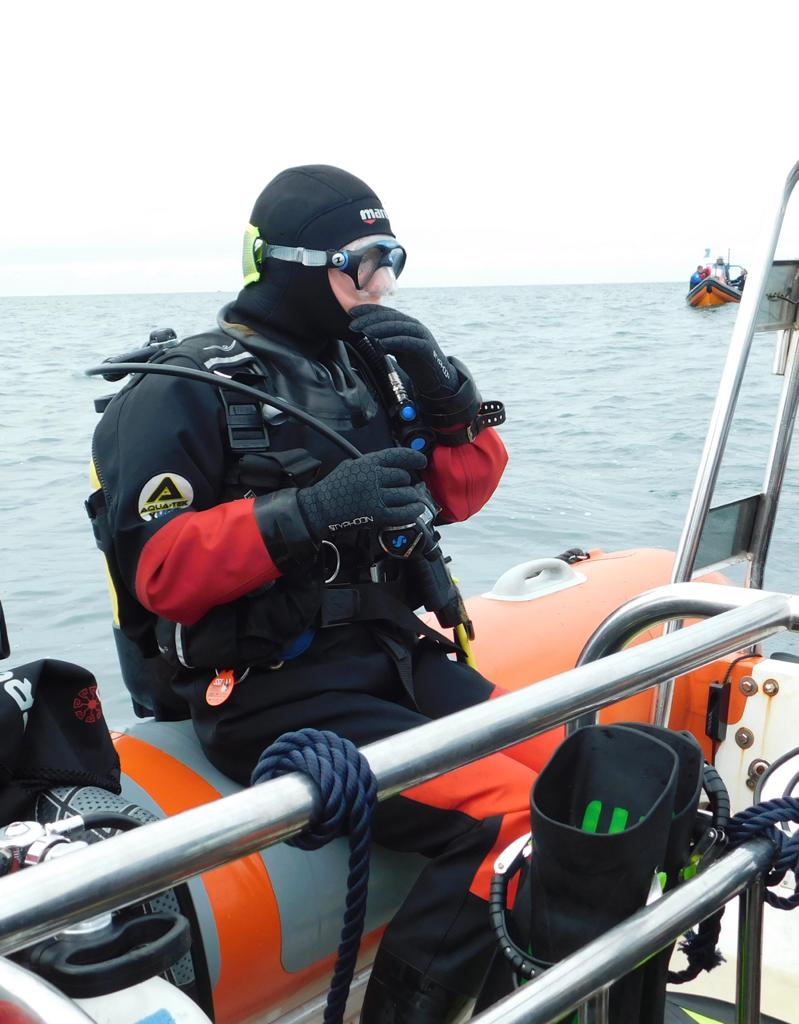 The group decided to just do one dive on the Sunday and so David and Jon took the cylinders over to Amwlch for filling while the rest of us got showered and ready for the BBQ with other Club members.

On Sunday morning, we were joined by Ian Hollingsworth and again launched from Trearrdhur Bay. We headed over to The Hermine, an iron-hulled barque which ran ashore in fog in 1890.  She is well broken up but Jon & Steve dropped us in close to the rocks precisely over some of the wreckage.  This was a lovely scenic dive with lots of life on the wall as well as amongst the rocks.  Lobsters, common sunstars and spiny crabs were seen as well as a catshark spotted by Clemmie and Rosy.

After recovering the boats at Trearrdhur, Ian and David decided to do a shore dive nearby with surface cover provided by Dave and Clemmie. The rest of us started to prepare for the trip home and Rosy and Jo stripped the beds and tidied up at the Sea Cadets.

Huge thanks to the divers : Dave M, Clemmie, Clive, Amelia, Tim E, Simon B, Rosy, Jo, Helen, Sue, David H and Ian, to Jon and Steve W for coxing the boats for us and to Tim P for general support.  The weather was kind with sunshine and no wind (in contrast to the forecast) and calm sea conditions, perfect for our Ocean divers to get their first experience in the sea.

Following various last minute changes of plan due to Covid, we found the Sea Cadets at Holyhead and they invited us to hold our BBQ there and even provided the gas BBQ and tables and chairs!

The food was expertly organised by Maxine and Jane, with meat provided by SueaAnd caramelized onions made by Paul.  Covid again hampered the plans as our original BBQ supervisor, Pete Morgan, couldn’t come following a change in his wedding anniversary plans, and then our back-up, Kevin, couldn’t come due to  his daughter’s positive Covid test on the Saturday morning!  Nevertheless, club members always step up to help and so the cooking was started in the kitchen by Maxine and then finished off on the BBQ by Steve and Si Lowrie.

Around 35 members attended and it was great to sit about chatting with old and new members.  The weather remained good and we stayed outside until around 9.15 when it started to drizzle.  Barry from the Sea Cadets then returned to put the tables away for us.

The Social Committee would like to thank Maxine and Jane for all their hard work behind the scenes. 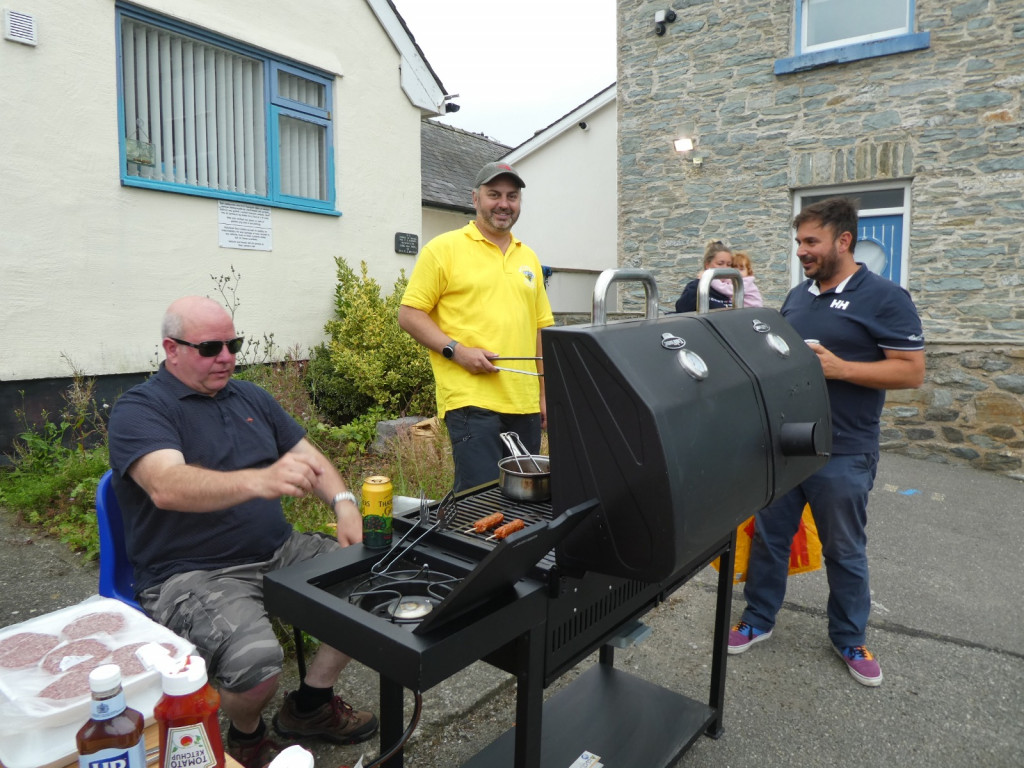