The Loose End Award – last bestowed in 1999.  You will find it in the Display Cabinet. 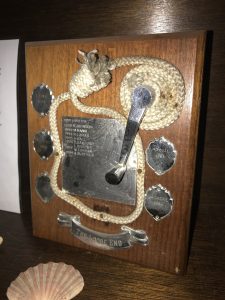 Paul says..  The Loose End Award is a novelty award created and given initially to Margaret Rouse, a very good friend of mine and a past full diving member, advanced diver and secretary of ECSAC during the 5 years 1982-6 – I was Diving Officer in 1982/3. She was and still is a very sporty and outward going woman and at a similar age to we baby boomers continues to sail, canoe, snorkel, swim competitively and cycle. I know she won’t mind my saying but she’s the type of person who has little blue birds flying around above her head – in other words every joke has to be explained and every situation is as though it is a first time experience greeted with wide eyes and giggles! She was and still is very popular so we all decided to try an ‘honour’ her in some way. A lot of diving was done all year round by a relatively large group of members and in one of the winter trips to a quarry in Wales we came across a Hillman Imp, a car she had at 17 and like any first car was dearly loved. To cut a long story short we recovered a door handle without her knowing and saved it for a suitable event.

This event came the following summer when after a days diving from the Club inflatable Margaret, who was coxing, decided to head back home at great speed but with the anchor still embedded in the sea bed. The rather thin line snapped but not before chaos ensued however we survived and the Loose End Award was borne – the handle is from the Imp and the cord is the remains of the anchor line.

It was never envisaged the trophy would be awarded annually but over the following years members excelled in their complete disregard for their own wellbeing and kept fellow ECSAC members highly entertained. Unfortunately many stories behind the annual awards have been lost in the mists of time but I do remember the reason I was graced with it. Briefly after a big party at the Club it was decided that most folk would relocate to my house – it was 3 am!! The reason was to assist me with the removal of a large (6ftX3ft) wasps nest embedded in the rafters above my garage which was stopping me reroofing – what could possibly go wrong? I was assured wasps are well asleep at this time so with a big shovel the nest could be put into a big bag, tied up and disposed of – wrong! I could go on but you can imagine the scene so it was decided this total lack of common sense warranted recognition.

Dave Bamford’s award was in recognition of his attempt to base jump without a parachute onto a mattress. There was a big build up to this and with a mind over matter referral he was really going to do it but we just (only just) stopped him – you had to be there.

I’m currently researching the other stories and will record these in due course, print them out and laminate the sheet for the display.

Editor’s Note:: It appears to me that this is close to ECSAC’s version of the Darwin Awards… Just as well it has been 18 years since it was last presented!