Late in the evening of 14th February 1760 a shipwreck occurred near Bolt Tail whose loss of life was so great, that even today its awful memory still lingers on. 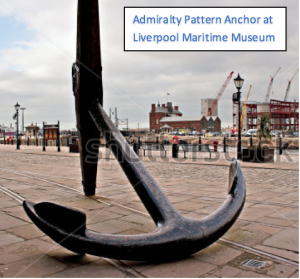 In 1760 the British were busy blockading the French sea ports and, on the 6th February, the Ramillies in company with several other ships sailed from Plymouth to join Admiral Boscawen’s Channel fleet. By the 14th, a violent southwesterly gale had sprung up, scattering the fleet and causing the Ramillies to heave-to, to make repairs to her badly leaking hull. The gale pushed her steadily eastwards until Bolt Tail came into sight. The sailing master, thinking that he was back off to Plymouth, mistook Bolt Tail for Rame Head and advised the Captain to run for the shelter of Plymouth Sound. As the Ramillies stood into what was really Bigbury Bay, the terrible truth dawned on the sailing master and he frantically called for full canvas as he attempted to turn the ship around. He never really had a chance. Under the huge press of canvas, the main mast crashed to the deck, closely followed by the mizzenmast. Most of the sails were now in shreds, so after dropping the anchor to prevent the ship becoming completely embayed, the rest of the wreckage was chopped up and thrown over the side.

Without any masts the Ramillies rode easier and with another anchor down the situation seemed almost under control. In all the panic however, it was not noticed that the anchor cables had got tangled and were continually chaffing. Soon one of them broke, and the other was not strong enough to hold the vessel in the huge seas. The sheet anchor was dropped as a last resort, but the Ramillies was doomed. She ripped past Bolt Tail and smashed her stern right into a large cave at the bottom of the cliffs. Ramillies must be the most dived wreck in Devon! The Ramillies Cave is marked on most charts as the left hand of two caves at Bolt Tail at the entrance to Hope Cove. This is incorrect, the remains of the wreckage is within and around the entrance of the right-hand cave.

I am sure most of ECSAC members in the first five years of club diving have a cannon ball from this wreck. In the late 1960.s a branch member found a Gold Coin, this though is the only valuable item found. In July 1975, the usual ECSAC team assembled at Deer Park, Dartmouth for the annual fortnight holiday. My Dive Buddy was Noel Davenport, I suggested we swam directly out of the usual dive area around the site and moved on a compass bearing directly out to sea. Brian Sadler was boat cover at the helm of my 10-foot Avon Dinghy and he dropped us approximately 500 metres off shore. After a 500 metre swim across an interesting area of rock and shingle we found a cannon, lying at right angle to the shore, muzzle pointing inshore. First thought was this must have been ditched to help lighten the ship. It was about 2 metres long, just the bare casting, no sign of carriage or fittings attached. Thinking we might find more, we swam on. About 30 metres beyond the cannon we found a huge admiralty pattern anchor. The stock was missing, the anchor lying with the Hawes Ring towards the shore and the cannon. (and I thought CS Forrester was clever when Hornblower ordered Bush to lash a cannon 20 fathoms along the hawser to give the anchor more “Bight” by lowering the pull, when he had to anchor in a gale of wind!) We measured the anchor by lying alongside, it was 18 feet long and 12 feet across the flukes. One of the flukes is bent. This was obviously the anchor with the chaffed hawser.

We surfaced and looked around for identifying marks ashore. We had no surface marker buoy to leave as a marker, relying on Brian’s bubble following ability to be there when we surfaced. The result was 40 years of searching by Our Founder Member Neville Oldham, who found “The Anchor” again electronically in 2015. He asked me to dive on the echo but unfortunately, we never made it. (Possible Club Search?) 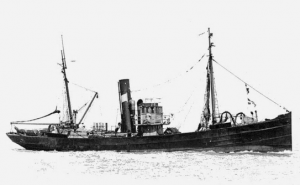 During the First World War the admiralty commandeered large quantities of UK Fishing Trawlers and Drifters which were converted for use as Minesweepers, Escort Ships and Harbour Defense Vessels Picton Castle was a 390 ton  castle Class steam trawler converted for minesweeping (Photograph of similar vessel.)

In the late 1960’s I suggested ECSAC should charter a Dartmouth Boat for a diving weekend. Not a Live Aboard but an interesting boat with a skipper who would take us to local sites with wrecks at a maximum depth of 30 metres. At this time Tony Aylmer (later Dolphin Diving Services) was the chairman of Dartmouth Sea Angling Club, he suggested Ray Barnett with his boat Freebooter. Freebooter is one of the famous Dunkirk Little ships, a 50-foot ketch. We agreed to his fee and we had 5 wreck dives in the three days available to us in July 1973. The ships were as follows: 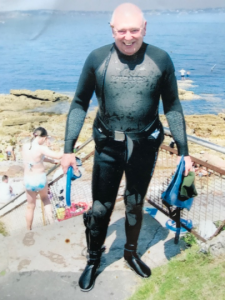 Torbay Branch had fixed a marker buoy on the Dudley  Rose wreck, John Wright and I dived her several times during the summer of 1973, traveling by inflatable from Dartmouth. One memorable dive we stood by the bridge handrail watching mackerel chasing and being caught with feathers, by anglers from boats moored above us. Visibility was exceptionally good, at 30 metres we could see more than 20 metres. You don’t have to travel to the tropics for good diving and weather to match, this is after a shore dive from Brixham July in the incredible summer of 1976 (Oh for more like it) 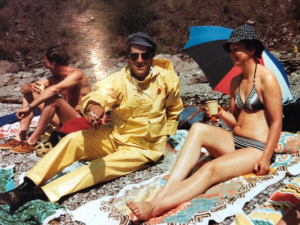 More July 1976, Ann in suitable attire with Brian Sadler, boat cover for the day in “Gladys” our 19-foot Fisherboat, having delivered Ann, Margaret Sadler, Maureen Davenport, her two daughters and Marg. Bingham plus barbeque and food to Ladies Cove, before the days diving commenced.

Sometimes, you don’t even have to get wet to investigate a wreck! T 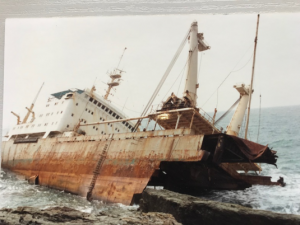 his was parked at full speed at night directly below the Coastguard Look Out Point at East Prawle. A similar one occurred at Mousehole during one of our Easter Dive sessions, the huge trawler Conqueror, on auto helm, with nobody on watch, ploughed up the shingle and rock beach, leaving 60% of the ship high and dry about 700 metres west of Mousehole Harbour. We had to leave Lamorna the following day so did not see what remained after “The Gentlemen” in small boats had left, but I bet there was no brass left visible within hours. Ann and I had coffee at a friend’s cottage a few months later, it was served on a magnificent glass coffee table with a polished brass rim, it looked strangely familiar!

There are still seven cannon in the area below the Castle. Cathy Curtis and I found six in 1973, Neville Oldham found three more in 2003, raised one and this is now on the Fish Dock at Kingswear, as discussed in 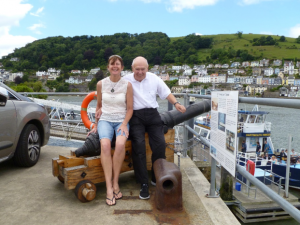 < Left – Cathy (Kate) Curtis and Alan with the recovered cannon at Kingswear.

They form a symmetrical pattern of two parallel sides with two canon each side plus two at one end, almost as though they are along the sides and stern of a vessel which sank on the spot. There must be other articles around. I have never dived below Dartmouth Castle, I am sure this is worth a look.

There is very little diving activity out of Dartmouth since Dolphin Diving Services closed, following the development of Deer Park Caravan Site by The Camping and Caravan Club. I have spent the last ten years kayaking in the river estuary and sea around and the only dive activity was from “Falcon” a well equipped day boat operated by Tony Hoile, former BSAC National diving officer and ECSAC Annual Dinner guest speaker. This operation seems to have closed.  We enjoyed years of wonderful diving, Ann and I had a series of motor boats moored at Dart Marina and operated the boats Gladys and Gladys 2 (A 22-foot Cabin Boat with 4 cylinder marine diesel engine) with Tony Aylmer and Neville Sheard from Deer Park. With the club boats and enthusiasm, I am sure there is still lots of dive opportunity available, to my knowledge the wrecks I have described have not been dived for years. If anybody wants more information about facilities< I still have diver friends in the area and I will make enquiries. (Dave Illingworth lives in Hope Cove and is Coxswain of the Lifeboat)

What about Wales, Dorset, Scotland, Yorkshire, The Lake District, Mediterranean coast of France, Shore diving in Sinai and Ireland? There’s still plenty more to go at, if your want to read about it. (Plus the 40th BSAC Dinner at The Guild Hall and “My Life ON The Blue Stuff”)