First an apology! – Treguier, a town in Brittany became Tregoe last week. (Predictive text rears it’s head again). This beautiful town situated on the Treguier River was the first stage of The Yachting monthly Triangle Race. Dennis Courtney (Skipper) and Me (Crew) took part in the race in 1998 in Dennis’s Yacht Quadrille a Nicholson 31. (More of this and other trips later, when we surface and become “My life ON the Blue Stuff).

BACK TO THE SINAI PENINSULAR. 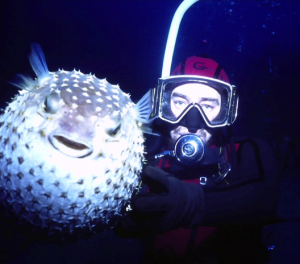 Angus joined us on several occasions on Sinai trips! The first time he discussed the trip with Ann and expressed his concern about insects he might meet, especially the stinging types. She assured him there was no problem, the most common insect was the House Fly! Check in at The Caravan Hotel on arrival, open his room door and he met the biggest Cicada he had ever seen, flying around the room with a noise like a Lancaster Bomber.

Once in the Blue Stuff he forgot all about insects and made friends with the locals. (That’s Angus on the right). He got into the routine of diving, eating, drinking the local beer and meeting new friends from other BSAC Branches. 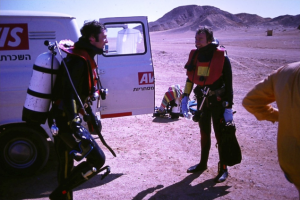 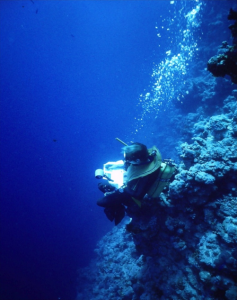 Books were printed on plastic, ring bound together and available from Dive Shops in the UK. They provided pages of fish and coral photographs plus aerial photographs of dive sites  and access points from Eilat south to Sharm el Sheik

The journey to Ras Mohamed was mostly on unmade desert tracks, a real bone shaker journey but well worth it.

With our ECSAC party of 18 we hired two Ford Transit and One VW vans. Unfortunately, the transit with Dave lister and Trevor Warburton on board had a puncture in the desert about 3 miles from our dive site at Ras Mohamed. There was no Jack in the van, so they were unable to change the wheel and we were not aware of the problem. After a half hour wait on site I took the VW back to search for them. I found two very thirsty divers about two miles down the track, having decided to walk to the dive site. Fortunately, the other Transit had a jack, so repairs were completed, and diving carried out to everyone’s satisfaction. 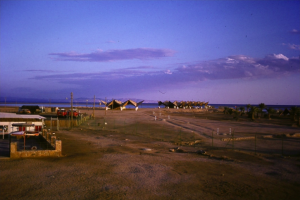 This is the Oasis of Dahab, renamed Di Zahav during the Israeli occupation there were several interesting dive sites between Di Zahav and Sharm including The Canyon.  This is a 100 metre dive down a coral channel with several exit points. I had made an agreement with Ann several years before this visit that I would never dive three sites, I have never dived:

Several ECSAC members, Dave Lister and Trevor Warburton discussed the dive with me and decided to take one of the opt out points if they didn’t want to go “The full Monty” of 100 metres! They all dived to the bottom.

We had a night dive at Di Zahav! This had to be carefully planned with the Military. We had to specify a point of entry and exit and exact times for both. Because there was a heavy military presence in the area and Saudi Arabia across the Gulf was across the Gulf, we were informed we would not be welcome if we returned to any other point! It was worth it, The dive was great, amazing to see Parrot fish wrapped in a cocoon and asleep in the coral and urchins and soft corals active.

All the ECSAC crew decided that they would like to drive from Eilat to Jerusalem one day for a site seeing trip. I decided I would rather dive Ras Burka, so they took the two Transits and I was happy with the VW for a day. I needed a buddy so asked at Aqua Sport if they had a diver who needed a buddy, they were delighted. They had a teenage German (who spoke no english), We shook hands, Ann collected two more Avocados, extra Mayonnaise and beer and we drove South to the bay at Ras Burka. My German was not brilliant, I asked Franz “Tief Du Getaught”, and he said Funfsig metres. I had dived the site frequently on previous visits and took him on a series of ledges down to 50 metres and back up to a stop at five metres and up the beach to lunch. I had one very happy German friend! He kept smiling and saying “Funzig Metre, nicht funfzehn, das war sehr gut”. OMG, I thought he had  said fifty metres, he said fifteen I signed his log book A Heywood BSAC 16466 and we had another beer. His smile got bigger every mile!

A site we used several times during every visit I made to Israel at Ras um Sidd entailed a drive within a kilometer of a closely guarded military base with hundreds of ground- to- air rockets set on angled launch frames and aimed across the Gulf. It was a fascinating site and never altered in the several years of our trips to Sinai. Our final visit was within weeks of the proposed return of the Peninsular to Egypt, we drove to the dive site past the rocket site and stopped for a closer look at hundreds of rockets cut from ply wood and painted to look like ground to air missiles. What a hoax.

One of the Aqua Sport instructors recommended a dive North of Sharm known locally as The Pinnacles. One of the shallow (50cm) approaches across a coral table in great discomfort to a vertical drop off, this time to only 30 metres not 250 metres as Ras Mohamed. A great dive with the usual wonderful visibility and lots of Table and Gorgonian fan coral. We discovered a strange flat area of dead coral at a lower level, further investigation to find out what had killed the coral unearthed a huge amphora. It is at least 1.5 metres high and 800mm diameter, sitting vertically with the rounded base encased in coral. Digging around the powdery bas uncovered a pool of Mercury. Obviously the amphora was part of the cargo of a ship, wrecked on the coral reef, the leaking “quicksilver” had killed the surrounding coral. I think the majority of ECSAC divers thought this was riches beyond their wildest dreams! Talk that night was how to gather and contain the Mercury and take it back to UK! Andrew Simpson had a camera housing which required a positive pressure to ensure it was properly sealed prior to diving. This pressure was applied via a common or garden bicycle tyre pump. Simple, a jam jar was acquired, the mercury sucked into the pump cylinder and blown into the jar. Pleasure diving was forgotten by the “Engineers”, every dive was a mercury search. Every night I argued that this was dangerous, Israeli Customs would find it and this would land us all in a pile of trouble etc Every night we sat around two or three jam jars part full of heavy mercury with the alluminium bicycle pump looking rather tired. Then suddenly there was a slight explosion and no more bicycle pump. All that remained was a little pile of alluminium powder and the rubber connector. Obviously salt water, alluminium and mercury don’t mix. I won my argument and the mercury was returned to its 1000-year-old resting place and a diver with a better pump. Andrew could not take any more photographs either. 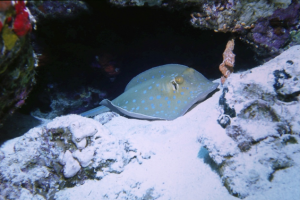 Forget mercury, this dive site provided a gentle slope from 30 metres down to who knows where. I was photographing a sting ray at 30 metres when my buddy pointed below and started to move down.

I stopped him and swam after a diver way below. He was just going deeper, looking to right and left and enjoying life. I chased the diver I recognized as Jim Booth. I caught up with him by grapping an ankle and pointed up. Fortunately, he stopped, and started ascending with me. When we reached the surface I asked what on earth he was doing and he looked bemused and said “enjoying my dive”. My depth gauge recorded 63 metres. Jim thanked me profusely at the club room several weeks later, said he had no idea how deep he was. I can remember feeling this was too deep for fun! I just concentrated on stopping the decent, the only physical thing I remember was hearing my heartbeat very loud and slow. (This was on air, these fancy gases used today are all Too Grown Up for me”. I think I’ll join Angus Sun Bathing in Sharm el Sheik! 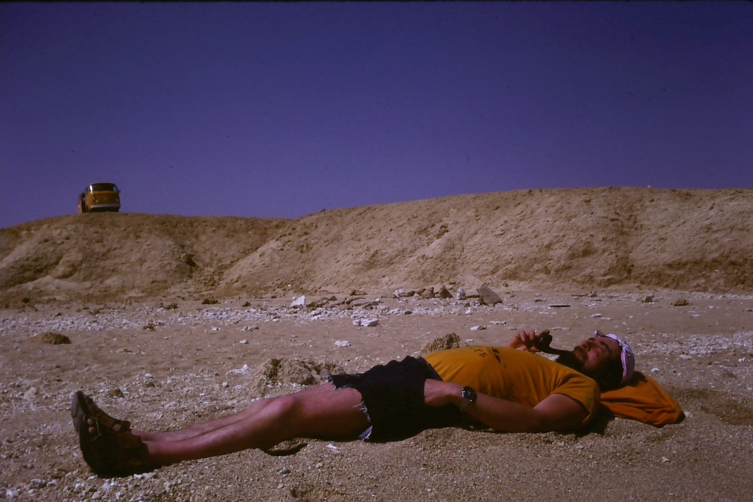 Or maybe it’s time to tell you about “on the blue stuff instead of in it!