In Chapter One I described my first Scuba Dive, in The River Bolin near Manchester airport. The regulator was a single hose with a DIN connector onto an 8-litre cylinder, 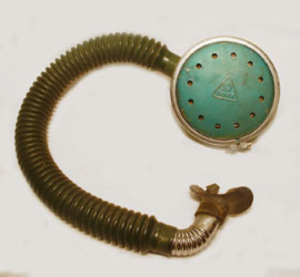 both were manufactured by Draeger. The photograph on the right is their Delphin II, the model used. Exhaled air was blown through a Duck Bill valve and out through the holes around the perimeter of the valve. A simple way of meeting the Cousteau patent, ensuring the inlet and exhaust are always on the same level, but leaving expired air to be reused on the next intake breath. In 1954 I was not aware of this problem and at a maximum dive depth of 2 metre it had no effect on the fun I had, despite water temperature of 4 degrees and no diving suit. 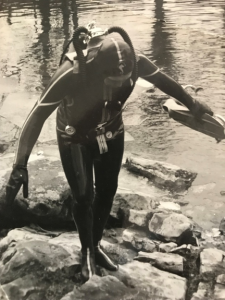 Sport diving was certainly in it’s infancy, enthusiasts were buying navy surplus suits and DESA oxygen rebreathers, even RAF aircrew exposure suits before expanded neoprene appeared on the market. The local Dive Shop was Fenn Aqua Sport, in Stoke, a business stationary and printing shop they opened their first floor and provided most of the early ECSAC members with gear. 3/16th inch single skin neoprene suit kits, glue and yards of yellow tape were sold to budding “Plungeurs”, sales of Evo Stick 528 impact adhesive went through the roof.

Single skin neoprene was soon replaced by double skin, sealed into a stronger surface on both sides not an open cell finish inside as earlier material. This was much stronger and easier to dress into although not as warm as single skin and required lots of powdered French chalk, talcum powder or “Washing Up Liquid” as a lubricant to ease the struggle into the suit. The biggest improvement came with the introduction of double skin neoprene with a nylon lining and a variety of material thickness to improve insulation, up to 8mm!

A club dive to remember at this time was planned for Mid-January. A shore dive in sheltered water was needed. Of course, what better place, Holyhead Harbour! No rough seas there, always diveable, in any weather!!!! We gathered eight divers and Ann as shore cover and set off in two cars, Ann and four divers plus diving gear in our Austin 1100 saloon, Neville Oldham had four plus gear, a coke filled brazier and a huge pressure cooker full of Nev’s version of Lancashire hotpot in his Sunbeam Rapier. THE WEATHER WAS FOUL. Pouring with rain and blowing a hooley, fortunately off shore.

We found a vacant war surplus Pill Box, changed into a variety of battered and mended wet suits, Neville brewed tea and lit the fire in the brazier leaving Ann to supervise the cooking and we discussed a dive plan. As diving officer, I set a compass course to a prominent point on the harbour wall and sent pairs off to aim to surface at the point, returning on a reciprocal course to the Hot Pot and a warm fire.

Annabelle Jores (Before the club wedding to Roger McDonald) and Steph Wallbanks were late leaving, Annabelle waiting for the glue to dry to seal a huge tear in her suit and Steph delayed because she had forgotten a towel and was changing with due modesty behind a head scarf in the rear of the Pill Box. Four pairs of divers surfaced within 50 metres of the mark after a 400-metre journey then the fun started! No, you can’t use a pre-planned reciprocal if your return point is different from your original target. Only Neville, ex grenadier guard’s sergeant and desert navigator arrived at the starting point, this enabled him to stir up the fire and serve hot pot to the remainder on there return. All in all, a good fun day.

We dived, several weeks later in the River Lune at Kirkby Lonsdale, no rain, no wind but we had to break a hole through the ice to get into the water. Below the road bridges across th River Lune is BSAC branches who were members of NORFED (The Northern Federation of Dive Clubs) could dive, by prior arrangement with the River Authority. It was a fascinating dive, shoals of Brown trout were always there and if the river upstream was low Salmon waiting for a spate to continue their spawning journey could be found in the pool. Divers were not allowed to carry a knife, presumably to stop fish hunting! What the non-diving community did not realise was resting Salmon could be easily taken by simply pulling on a tail after a slow and gentle approach. Nobody ever took a fish from the water in this way however it was possible to relax the fish by stroking slowly then placing them back.

Another cold fun day but this time no hot pot, there was a bacon butty van on the bridge and he did a great day’s trade. Fortunately, the weather improved in time for Easter and our usual outing to Lamorna cove!

After joining a branch dive weekend at St Davids Bay in South Wales, my friend and fellow Director bought me a wonderful present. The Dunlop Rubber Company in Manchester had developed and produced rubber coated canvas diving suits, fins and other dive accessories for military use during the second world war. The photograph is an early Sales Brochure of a dry suit produced in the 1960’s for amateur use. My wonderful present was one of these suits. 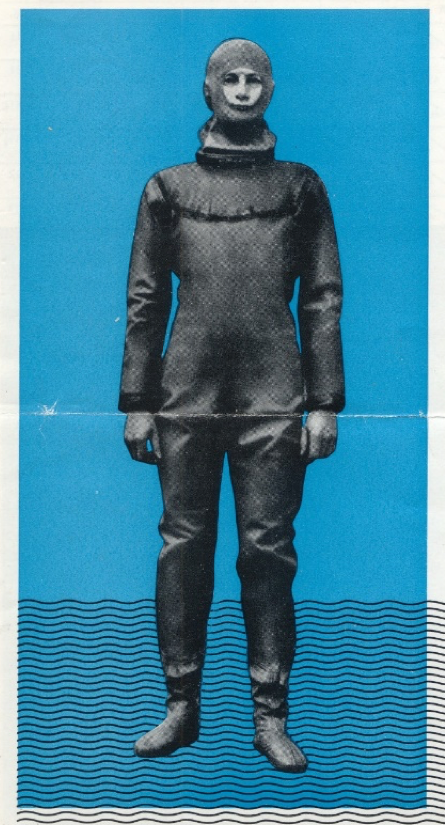 Neck and sleeve seals were thin latex and had to be treated with great respect to prevent tearing. Entry was through the neck seal which was sealed to the hood by a steel elliptical ring, This was fiited over the head and the neck seal inserted and stretched over the ring. The hood was then stretched in the same way an adjustable ring then clamped the three together to make a completely water proof seal! A Duck Bill valve was fitted to the top of the hood to vent the suit.

Modern Dry Suit users will immediately see the problem! “The Squeeze”. Once vented, there was no way of inflating the suit and with no tuition on the need to carry additional weight and not completely venting the air from the suit. An early dive to 30 metres left me with blood blisters on arms and legs, but warm and you could wear the suit over your everyday clothes! No need for tons of led either I never varied from the 6-kilo belt I used for Scuba and Free Diving until I eventually briefly succumbed to a neoprene dry suit.

Scuba Divers always attracted children and adults when we launched and retrieved from bathing beaches. It was great fun to return from a dive and take off your Dunlop Dry suit to reveal an immaculate light grey suit, white shirt and tie, put on your highly polished leather shoes and leave the beach. Learned this one after the Bond dinner suit appearance after a dive in Thunderball, the film which doubled our membership overnight, after a week of club member appearances fully kitted at The Majestic Cinema in Macclesfield, followed by weeks of “Try Dives”

Sorry about the break in my story! Hopefully all is now sorted so back to the Blue Stuff!