There will be a series of articles covering some of the artefacts found around the club, this one tells you about the Beer Bottle..

It may have seemed a rather random thing to have this beer bottle hanging around, but there is a story and some history attached to it. 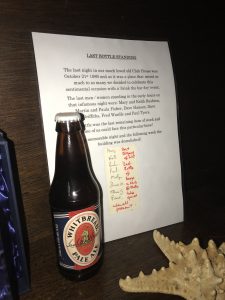 You will find the bottle now had pride of place in the club in the display cabinet/book case by the door.

This particular beer bottle was the last one left in the bar in the old clubhouse (the one that preceded the current purpose built clubhouse.

The explanation on the paper behind it reads…

“The last night in our much loved old Club House was October 21st 1989 and it was a place that meant so much to so many that we decided to celebrate this sentimental occasion with a “drink the bar dry” event.

The last men/women standing in the early hours of that infamous miht were Mary and Keith Rushton, Martin and Paula Fisher, Dave Hanson, Dave Griffiths, Fred Wardle and Paul Tyers.

The bottle was the last remaining item of stock.   The following week the old clubhouse was demolished.”

So if the bar is getting low on beer at a club night, best not crack open this bottle..  One, it may not be at its best, second you’d be drinking some of the club’s history.